Graduate Students Take ‘STEPS’ Toward the Future of Science

As scientists and scholars grapple with shrinking research budgets and out-of-touch politicians, a group of Dartmouth graduate students have founded the Science Technology and Engineering Policy Society (STEPS), an organization working to engage students at the intersection of science and policy. 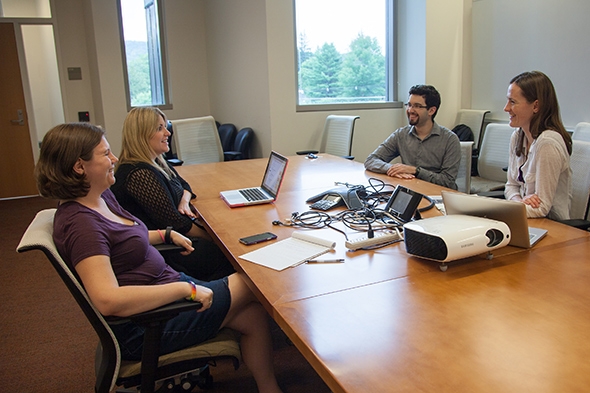 Erin Shoemaker-Kiess, a co-founder, is president of STEPS, which currently has nine active members. Julia Bradley-Cook and Alexandra Giese, also co-founding members of STEPS, are looking for other Dartmouth graduate students to help carry the message that science is worthy of support, bringing enormous paybacks to the public in new technologies and medical advances.

“Though it often feels like our research projects in graduate school are insulated from the outside world, science does not exist in a bubble,” says Shoemaker-Kiess. “It is imperative that as young researchers we learn to communicate with lawmakers and the public in order to advocate for science funding and to educate about the exciting work that we do.”

“We are trying to enlist people who are interested in science policy and introduce them to the idea that communication is really pivotal if you are trying to connect with senators and congress people or if you are writing an article,” says Giese, a PhD candidate in the Department of Earth Sciences’ Glaciology Research Group.

STEPS is engaged in a campus-wide recruiting effort to bolster the ranks of graduate students across programs and schools who can help target legislators and policymakers at the state and federal levels, nongovernmental organizations (NGOs), and the public at large. The invitation is open to all graduate students, including those at the Tuck School of Business, Thayer School of Engineering, and the Geisel School of Medicine.

“Without the support of the general public and the policymakers in Washington and the state capitals, the future looks grim,” says Bradley-Cook, a PhD candidate in the Graduate Program in Ecology and Evolutionary Biology. Acknowledging that science is often complex and not easily explained, she says, “We need to think about taking the science that we are used to publishing in the journals and making it something that is attractive and digestible to someone outside of the scientific community.”

Shoemaker-Kiess, Bradley-Cook, and Giese see STEPS’ mission as fulfilling many needs, equipping its members with ammunition for outreach and advocacy missions. The organization will serve as an internal discussion group—a forum on policy issues, a career-advising resource for the Dartmouth graduate community, and a support network for outreach through direct engagement with policy makers or through the news media.

The students are already finding ways to engage people beyond Dartmouth. In June, at the American Meteorological Society (AMS) Summer Policy Colloquium, in Washington, D.C., Bradley-Cook, Giese, and STEPS member Gifford Wong met with science policy professionals. “Many of them expressed interest in interacting with scientists, getting connected with networks outside the Beltway,” says Giese.

“Given the relevance of science to decisions that are made in Washington, D.C., it is increasingly important that scientists have the skills to engage and work with policymakers,” says Bradley-Cook. “The colloquium introduced us to the fundamentals of science policy and enabled discussions with science policy experts, hands on exercises, and networking with other students and professionals.”