This story was originally published in the Dartmouth College Fund’s fall 2014 issue of “From the GREEN.”

Kate Huffer ’15, a neuroscience and biological chemistry major from Green Bay, Wis., is a student conductor of Dartmouth Youth Winds, a program that brings local middle school students to the Hop to make music with undergraduate members of the Dartmouth Wind Ensemble. She plays oboe in the ensemble and is the group’s librarian. She’s also the drum major of the Dartmouth Marching Band. “It’s fun to cheer for the football team,” she says, “but I’m really there for the music.” 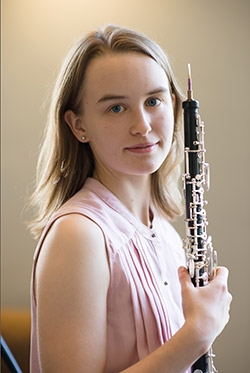 “College has taught me that I can ask hard questions outside the boundaries of people’s knowledge—and music and labs are safe environments to experiment in,” says Kate Huffer ’15. (Photo by John Sherman)

From the GREEN spoke with Huffer about her Dartmouth experience:

I auditioned for several music groups, including the Wind Ensemble, my freshman fall and didn’t get in to any of them. But friends convinced me to join the Marching Band, so in the winter I asked Matt Marsit, who advises both the Marching Band and the Wind Ensemble, if I could play. I didn’t specify which ensemble, and the Wind Ensemble needed an oboist, so that’s how I was able to audition again. I’m so glad I did, because the music groups at Dartmouth are my family, and my experience in the music department has shaped me as a person.

The Youth Winds program is an opportunity for Upper Valley middle school students to come to Dartmouth for eight weeks, with a performance at the end. It’s a magical process. The Dartmouth students are role models and mentors, but by the end, the middle-schoolers are independent. Watching them push themselves outside their comfort zone is fun. We played a piece called “Algorhythms” that has three separate, rhythmically challenging parts going on at once. It’s hard, but they did it. They’re at an age where they’re still new to their instruments, and moving from sponge-like absorption to processing information at a bigger level. They are self-aware enough to say, “I don’t get it,” but they don’t have that filter to think, “I should know this already.” I get a lot out of going back to the basics with them—sit up straight, breathe from your stomach. It makes me play better.

I took the conducting course with Melinda O’Neal so I could be a better drum major, and as a bonus Matt Marsit invited me to co-conduct Youth Winds with Jacob Weiss ’16 last year. As conductor, you have to figure out not only how to convey your vision for the music, but teach things like dynamics. I’d say, “Okay, let’s whisper,” and they’d do it. “Now let’s play louder,” and they’d do it. When they got it, it was like, “Oh, yes—they did it!” Conducting their performance, there was skin in the game for me. Their band teachers, parents, neighbors, and grandparents show up, and the students want you to meet them. I needed to make sure that I didn’t let them down.

I want to go to graduate school for neuroscience. I’m writing a thesis on attention, asking, what do your pupils do, moment by moment, when you’re paying attention to something? No one has looked at dynamic pupil dilation patterns before. College has taught me that I can ask hard questions outside the boundaries of people’s knowledge—and music and labs are safe environments to experiment in.