Students Petition Library of Congress to ‘Drop the I-Word’

Daniela Pelaez ’16 received good news this summer: Her permission to stay in the United States was extended by two years by the United States Citizenship and Immigration Services. It was good news, and yet a reminder of the instability of her situation.

Pelaez came to national attention in 2012 when a deportation order, subsequently canceled, nearly kept her from enrolling at Dartmouth. Along with other members of Dartmouth CoFIRED (Coalition for Immigration Reform, Equality, and DREAMers), Pelaez and Melissa Padilla ’16 are working to make sure that the whole Dartmouth community knows that undocumented students are part of the community. 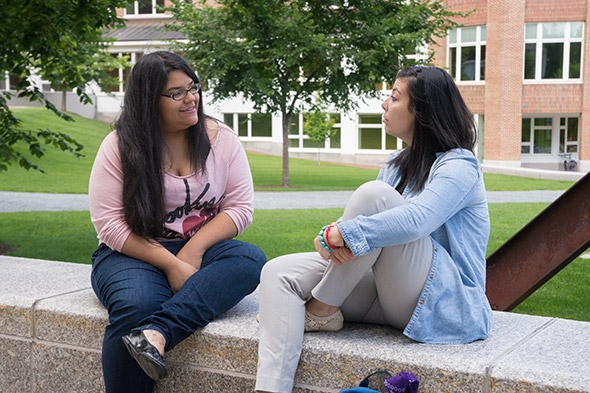 Daniela Pelaez ’16 and Melissa Padilla ’16, members of the Dartmouth Coalition for Immigration Reform, Equality, and DREAMers (CoFIRED) are working to call attention to immigration issues. (Photo by Eli Burakian ’00)

Having this acknowledged is one of CoFIRED’s key objectives, she says. Pelaez believes that the Class of 2018 includes at least six undocumented immigrants, including participants, like her, in the government’s Deferred Action for Childhood Arrivals (DACA) program.

Last spring, CoFIRED found that one of its published goals for Dartmouth—that the Dartmouth College Library use “undocumented” instead of “illegal” in reference to immigrants—encountered policy the College does not have the power to change. The Dartmouth library follows a system of subject headings set by the Library of Congress. But, as Elizabeth Kirk, associate librarian for information resources, explains, “This was an excellent opportunity for the Library to step forward and engage students in positive change.”

The national advocacy group Race Forward began its “Drop the I-Word” campaign in September 2010, concentrating its efforts on petitioning journalists and media outlets to alter reporters’ word choices related to individuals’ immigration status. CoFIRED’s spring term “Drop the I-Word” petition to Dartmouth administrative and student leadership—noting that Dartmouth is “one of the few institutions of higher learning in this country to accept undocumented students and offer financial aid”—urged the College to leverage its position of leadership to effect change.

“As students, we learn how important the words we use are,” says Pelaez. “This project is a way of acting on that.”

In March, Amy Witzel, social sciences and humanities reference bibliographer, informed CoFIRED that the Dartmouth library staff would work with them. “The Library Administration fully supports submitting a subject-heading-change proposal to the Library of Congress,” she told the students, noting that the petition, “if successful, would change the subject heading language across all libraries adopting the Library of Congress Subject Heading system.”

Working with the Dartmouth library, Witzel says, “students have the opportunity to bring change to libraries of all kinds across the United States. This is also a rare opportunity to understand how librarians work to change the way that scholarship is documented.”

Kirk says that John DeSantis, a cataloging and metadata services librarian, “did an outstanding job of walking students through the process; demonstrating how headings have changed over time, sometimes in vivid ways; and then working through the process. He worked seamlessly with Witzel and Jill Baron, librarian for romance languages and Latin American studies.” A decision from the Library of Congress about the subject heading petition is expected in late October.

Padilla and Pelaez are excited about the traction that the “Drop the I-word” petition has gained. And programs like the First Year Student Enrichment Program (FYSEP), in reaching out to first-generation college students, offer support to many undocumented students, say Padilla and Pelaez. But undocumented students bring a particular subset of concerns and challenges to Dartmouth because of their immigration status.

CoFIRED’s goals, they say, include recognition and support of those issues, all in the interest of having access to the full Dartmouth experience. For example, for students with unsettled immigration status, leaving the U.S. to study abroad can be difficult if not impossible. Additional domestic options for away-term studies, Padilla and Pelaez say, would open possibilities for Dartmouth students whose immigration status makes travel outside the United States problematic.