Read the full story by Anna Fiorentino, published by Thayer School of Engineering.

Early next year, Dartmouth engineering professor Rachel Obbard and her team will become the first to transport sea ice cores from the Arctic to the lab at their original temperature—an important achievement in the effort to better understand climate change. 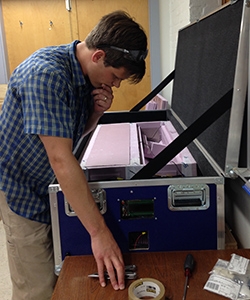 Sea ice, which can be as much as five meters thick, controls the exchange of heat, fluid, gases, and chemicals between the ocean and the atmosphere. The loss of thick multiyear sea ice has important implications for the Earth’s climate. “Sea ice plays an enormous role in ocean circulation and global climate,” says Obbard.

Analysis of the ice, however, has been limited by the difficulties associated with retrieving, transporting, and curating it. “Until we can get the sea ice to the lab with its original pore structure intact, we can’t accurately model that structure.”

To accurately model the complex brine networks in sea ice, the ice must be maintained at its original temperature following extraction, something that hasn’t been possible until now. In February, Obbard and a team from Thayer School of Engineering, including PhD student Ross Lieb-Lappen, Thayer ’16, and one or two undergraduate students, will become the first to transport sea ice at its original temperature of minus 2 degrees Celsius at its base and minus 35 degrees Celsius at its top. The group plans to collect approximately 12 sea ice cores from off the coast of Barrow, Alaska and drive them across the country to Dartmouth’s Ice Research Laboratory at Thayer.

To do that, Obbard will use a system she and her students have spent the last three years inventing called the Ice Core Extraction while Maintaining In-Situ Temperature Transitions (ICE-MITT).