This story was originally published in the Dartmouth College Fund’s fall 2014 issue of From the GREEN.

Engineering majors Krystyna Miles ’16 of North Salem, N.Y., and Shinri Kamei ’16, of Tokyo, Japan, met in “ENGS 21: Introduction to Engineering,” when they were charged with designing a solution to a mobility problem. Their team developed an ergonomic serving tray that won the Jackson Engineering Prize and the 2014 Dartmouth Ventures entrepreneurship competition. Miles and Kamei recently founded Tray Bien, a new venture to manufacture and distribute the tray to the food service industry. 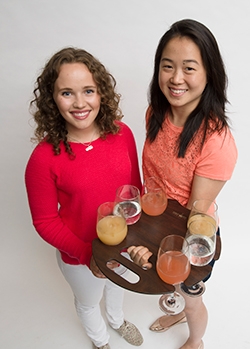 From the GREEN spoke with Miles and Kamei about Tray Bien:

What prompted you to redesign the humble serving tray?Kamei: We’re second-year engineers—we haven’t really done anything super-technical, so we knew we weren’t going to try to design anything extreme. Thayer has a big focus on human-centered design, and it emphasizes the importance of thinking about creative ways to get around the problems that people haven’t thought of before. So we looked at the unsexy problems that people haven’t tackled, and that’s how Tray Bien came to be.

Miles: We had listed “standard serving tray” during our initial brainstorming session, but didn’t know it was such a problem until we went to town and talked to a waitress at Molly’s. We asked her if she had experienced carpal tunnel or tendonitis from working in a restaurant, and she said, “Yeah, of course. Everyone here has tendonitis, and we’re just all waiting to get carpal tunnel.”

So what was the process for designing Tray Bien?Miles: Once we knew that we wanted to design a better tray, we realized we had a perfect testing audience because we could directly interact with users here in Hanover. Throughout the 10 weeks of the course, we were constantly in town, bringing our new prototypes and questions.

Kamei: We came up with some pretty terrible prototypes at first, like one that was basically a suction cup a server could attach to the bottom of a standard tray. We brought it into town, and people were, like, “Oh, no.” It was great that people were able to give us that kind of feedback from the very beginning. We ended up with at least four prototypes that were completely different from our final design.

When did you realize you had something special?Miles: At the end of the course everyone presents their projects in the atrium at Thayer and the public comes around to see them all. We knew we liked our project—and we had a lot of fun creating it—but we didn’t know it actually had a future until all of these Thayer professors were coming up to us and saying, “This is a great idea. You need to protect this—go patent this right now.” So literally, while the two other members of our team were presenting in the atrium, we were running upstairs and signing forms to start the process of getting a provisional patent.

When did you decide to make Tray Bien a business?Kamei: When we started the patent process, we said, “If we’re going to file a patent, maybe we should try to do something with it.” The two other members of our group, Carly Kuperschmid ’16 and Yvette Zou ’16, decided not to pursue the business, but Krystyna and I were both game. We were put in touch with the VP of sales of the largest mid-Atlantic food service supply distributor. By the end of that one phone conversation, we were invited to come to a trade show and exhibit at our own booth.

Miles: The trade show was a perfect opportunity to get a small proof of concept going. We said to ourselves, “OK, if no one likes our tray here we’re probably going to stop.” But during the show, people kept coming by and saying, “Oh, I actually want this. Can I pre-order them?” After the end of the two days, Shinri and I sat down at our hotel room and tallied up all the pre-orders. She said, “How many is it? A couple hundred?” I was like, “I think it’s 2,000.”

Kamei: We recalculated it about four times. We just couldn’t believe it.

And right after that you won the Dartmouth Ventures competition at Tuck.Kamei: We submitted an entry for the undergraduate competition and came in second, which qualified us to compete in the Tuck competition. There were more than 100 other teams competing, and we didn’t think we stood a chance. But I think the critical aspect of all of our presentations is the energy that we bring. The audience just really enjoyed watching us, and it worked, because we won both first place and the people’s choice award—and $29,000. That was the critical capital to be able to start doing actual manufacturing.

So what is next for Tray Bien?Miles: We just sent manufactured samples to our distributor so their sales force can show customers and start taking orders. We also have a Kickstarter campaign in the works to get more funding and get our story out there, and we are working on our patents. We are also thinking about developing champagne trays and trays for retail sales.

When you came to Dartmouth, did you ever imagine that you’d be CEOs of a company at the end of your sophomore year? Kamei: No, absolutely not. I’m someone who usually just trods the beaten path. Entrepreneurship sounds like this nebulous, terrifying thing that takes some sort of ridiculous person to do. But at Dartmouth, every single step of the way, someone was there saying, “You should do this next, you should do this next,” and giving us the resources that we needed to succeed.

Miles: I think that this is the best educational experience we could have. If Tray Bien fails, at least we got an incredible learning experience out of it, and met a lot of new people. It helps take some of the pressure off that the driving force isn’t that we have to succeed—our initial goal with this was to learn. If it doesn’t go, we are still really glad that we did it.