An opening celebration is set for Saturday for the newly constructed Triangle House, a residence hall for the LGBTQIA community and allied students at Dartmouth. 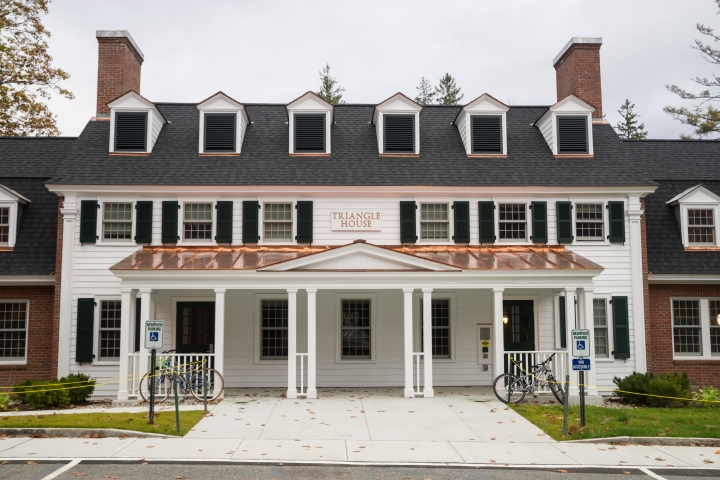 Located at 4 North Park Street, the building—formerly a residence for staff and graduate students—has been reconfigured into eight townhouse-style units to accommodate 27 residents and an apartment for an adviser. The building includes a communal kitchen and rooms for educational meetings and social gatherings.

“Triangle House changes the footprint of campus,” says S. Caroline Kerr ’05, president of the Dartmouth Gay, Lesbian, Bisexual, and Transgender Alumni Association (DGALA), and co-chair of the Triangle House Committee. “It’s a space built to serve not only the students who live in the house, but to support community, intellectual inquiry, and activism.”

The house functions as a residence, and is accessible at times to anyone on campus through events such as Pride Week festivities and academic outreach. There is also a class—“Sex, Gender and Society”—being taught in the house this term by Francine A’Ness, assistant dean of undergraduate students and a lecturer in women’s and gender studies. And, two sessions of Intergroup Dialogue on socio-economic status/class and race/ethnicity are run out of one of the rooms in the lower level this term.

Triangle House is one of several new living and learning options introduced this year, in an effort to build on Dartmouth’s mission of linking residence halls to the College’s academic mission. Other new residences include the DEN in Residence program for students interested in entrepreneurship and a Global Village community affiliated with language programs and the John Sloan Dickey Center for International Understanding.

Any undergraduate can apply for residency in Triangle House, regardless of whether they identify as LGBTQIA, but residents must show a commitment to learning about and supporting sexual and gender diversity. To meet the Triangle House program objectives, residents attend discussion-based house meals and take relevant courses or independent studies every term. Residents also commit to translating knowledge into action through student collaborations focused on social justice, organizing, service, activism, and social change. In addition, house members may participate in research projects and other activities with resident post-doctoral fellow Brianne Gallagher.

The groundbreaking for Triangle House, in spirit if not in reality, can be traced back decades, when DGALA members say Dartmouth’s campus climate was far less receptive to diversity. According to Ed Hermance ’62, founder of the alumni group that became the precursor of DGALA, the association formed in reaction to lesbian and gay students’ need for alumni support at a time when they didn’t feel they had support from the College.

DGALA has long been interested in seeking a safe living and learning environment for Dartmouth’s LGBTQIA community. “I’ve spoken with many alums who couldn’t imagine a resource like this existing on campus,” says Kerr.

In 2010, LGBTQIA student leaders furthered the cause during a meeting with then-College President Jim Yong Kim. The students pointed out how the LGBTQIA community lacked its own house, something enjoyed by other communities on campus. Melanie Pastuck ’11, was an intern for the Office of Pluralism and Leadership at the time, and drafted a sample constitution for the proposed affinity house that became Triangle House four years later.

“While as a young alumni I felt like the Dartmouth community did an excellent job of making me feel welcome and included, this building distinguishes Dartmouth as a leader in its support of LGBT-identified students,” Pastuck says. “My hope is that ultimately this facility will encourage more LGBT-identified and allied students to apply to Dartmouth, and participate in meaningful dialogue around these academic topics.”

More than bricks and mortar, Triangle House is symbolic, representing, in part, triumph over adversity, say alumni involved in creation of the house. The name alludes to the upside-down pink or black triangles that gay male inmates were forced to wear as badges in Nazi concentration camps, and are now widely used as gay pride insignia of the LGBTQIA community. The triangle is also a symbol for change. At Dartmouth, the three sides of the triangle also represent community, knowledge, and action.

“I believe Triangle House is going to launch the LGBTQIA community into new phases of activity,” says Kerr, who also noted the considerable enthusiasm and support, financial and otherwise, among alumni for this long-awaited facility. “I know our current students will take this new resource and do amazing things with it.”

Written by
Joni B. Cole
Share this
FacebookTwitterEmail
Photos