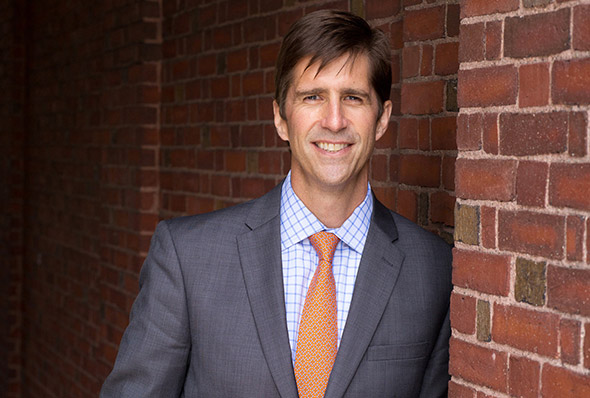 Andrew Davidson has been the assistant dean of development at the School of Engineering and Applied Sciences and of the Faculty of Arts and Sciences at Harvard. (Photo by Amy Thompson Avishai)

“In the course of a national search we found an exceptional development leader from one of the foremost institutions of higher education in the world,” says Bob Lasher ’88, Dartmouth’s senior vice president for Advancement. “In over a decade at Harvard University, Andrew has led growth in diverse areas relevant to Dartmouth at this moment, including major investments in interdisciplinary research and financial aid, the formation of an engineering school, broad-based annual support, and the early architecture of its current $6.5 billion capital campaign. Andrew is recognized as a talented leader with a reputation as a great coach and mentor in developing teams. Above all, Andrew understands the value of an Ivy League education and appreciates the uniqueness of Dartmouth in that exceptional category.

”Dartmouth has an unparalleled culture of volunteer leadership, exemplified by recent initiatives such as the Centennial Circle. Andrew has partnered creatively with volunteers on similar initiatives at Harvard and brings with him rich experiences,“ adds Lasher. ”Put in its most simple form, each charitable gesture starts and ends with a relationship—between the alumnus and the College. Andrew has a proven record of forming enduring, inspired relationships that result in a fulfilling alignment of the donor’s aspirations with the academic mission.”

Davidson will work with Lasher in support of President Phil Hanlon ’77, Provost Carolyn Dever, and College deans, as well as the chief development officers at the Geisel School of Medicine, Thayer School of Engineering, and the Tuck School of Business. He will also partner with Dartmouth alumni and parents, who have a long history of volunteer leadership in philanthropy. Dartmouth’s Advancement Division is made up of the offices of Development, Alumni Relations, and Conferences and Events.

"I could not be more excited to join Dartmouth,” says Davidson. “Unabashed passion and enthusiasm for the College have come across in every conversation I’ve had with members of the community. I’m looking forward to sharing that enthusiasm and contributing in a meaningful way to the school’s future.”

He comes to Dartmouth from Harvard, where he has been assistant dean of development at the School of Engineering and Applied Sciences and of the Faculty of Arts and Sciences. He served as the senior fundraising strategist for the $450 million engineering school campaign and was executive director of capital giving for the Faculty of Arts and Sciences, where he oversaw management and the operational strategy of the Capital Giving Department. He also led the early stages of Harvard’s current capital campaign. Additionally, Davidson has worked in a number of fundraising roles in the Boston and Harvard communities.

Davidson received a BA in English and history from Rutgers University and is an accomplished rower, having participated in a number of national and international regattas. He and his wife, Joyce, and their two sons, Liam, 17, and Charlie, 13, are active outdoor enthusiasts and look forward to exploring the Upper Valley with their dogs, Pal and Bear.