Dartmouth chemist Joseph BelBruno is a professor, an inventor, and now an entrepreneur. He is a co-founder, with Jack O’Toole, Tuck ’14, of FreshAir Sensors, the company going to market with a novel technology that signals the presence of tobacco and marijuana smoke. 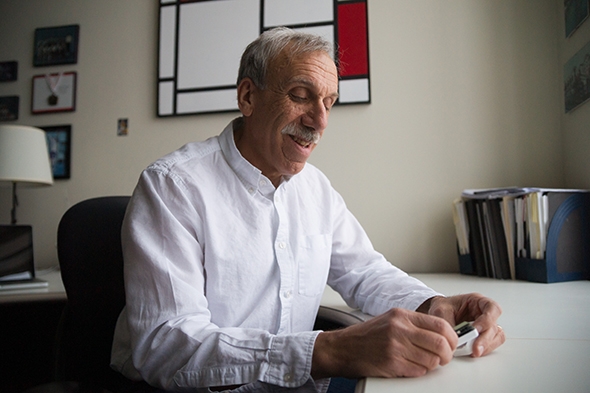 This is no ordinary smoke detector—it’s more sophisticated than those installed in homes and buildings to safeguard against fire by sensing the presence of smoke.

Instead, “it is chemistry that is making it all happen,” says BelBruno, a professor of chemistry and FreshAir’s chief technical officer. “We’re using polymer technology to do the sensing. That’s where the chemistry comes in.” BelBruno and his laboratory staff and students devoted years to the development and testing of polymer coatings sensitive to specific chemicals in the air.

Two Dartmouth organizations have assisted in the new venture. “The Dartmouth Regional Technology Center has been an exceptional resource for our startup, providing laboratory and office space. DRTC has also offered us the opportunity to expand, which we have done once and are in the process of doing again,” BelBruno says.

The DRTC, located in Centerra Resource Park, is a nonprofit business incubator—a 60,500-square-foot resource that offers space for technology startup companies. It is an incorporated business partnership that includes New Hampshire’s Grafton County Economic Development Council, North Country Council—a regional planning agency—and Dartmouth. The state’s Department of Resources and Economic Development assists in the management of the corporation. Business development and education operations of DRTC are carried out in collaboration with the Dartmouth Entrepreneurial Network (DEN). 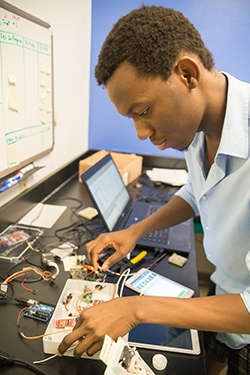 Anani Sawadogo tests the connection between the AirGuard device and the FreshAir online platform. (Photo by Eli Burakian ’00)

The Dartmouth Entrepreneurial Network has also “assisted us every step of the way,” says BelBruno. It is a core component of the newly established Dartmouth Office of Entrepreneurship and Technology Transfer. The DEN offers a wide range of services, including strategic advice, mentoring, educational programs, and networking opportunities.

“They provided us with opportunities to compete for funding and introductions to people who could help us with the countless complex problems that a startup involves. We wouldn’t have been able to get where we are without the support of the DEN and the Dartmouth and the Tuck School of Business networks,” says BelBruno.

In March 2013, Dartmouth Now reported on BelBruno’s pioneering development of a highly sensitive device that used his polymer films to detect, measure, and record the presence of nicotine from secondhand smoke in real time.

The latest incarnation of the device, now called AirGuard (patent pending), represents an evolution of BelBruno’s earlier proof-of-concept and now incorporates proprietary electronics and microprocessors. It has also been expanded to include two sensors. The prototype version incorporated just one sensor that recognized nicotine. The new commercial version has two sensors, one attuned to the nicotine in tobacco smoke, and another that recognizes a chemical specific to marijuana smoke.

“They both interned with us and, when they subsequently graduated from Thayer, we hired them as full-time employees,” O’Toole says.

In assessing the marketing potential of the new device, O’Toole, chief executive officer of FreshAir, says “Hotels are very interested in our product.”

“There are concerns about people smoking in hotel rooms and there is also a surprising amount of interest from places like public housing, condo associations, dorms, nursing homes, and jails,” says O’Toole. “We have a list of people who have approached us and are interested in the product.

“Our device will allow users to monitor unobserved areas and ensure these spaces are not being smoked in. It sends a signal over Wi-Fi that immediately alerts facility managers to someone smoking in a prohibited area,” he says.

BelBruno explains that the AirGuard devices are connected via the user’s Wi-Fi network to FreshAir’s server. “For purposes of notice, the server will send an email to the host—the hotel or property management—notifying them that smoking has occurred in a nonsmoking room.” he says. “The server also provides a dashboard through which management can access its devices and connect with them for retrieving data or configuring the device.”