Dartmouth Adventures in STEM Has Its Premiere

A two-year pilot program is giving 15 first-year E.E. Just Scholars a leg up as they embark on their college careers. Dartmouth Adventures in STEM (DAS) provided a springboard start with a five-day boot camp that served as an introduction to the students’ Dartmouth undergraduate experience. 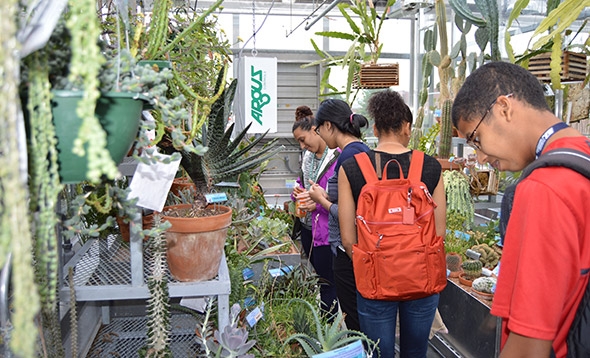 The DAS program, which took place on campus in August, had students attending daily lectures in mathematics, physics, chemistry, and biology, taught by professors who would go on to serve as their individual advisers for the coming two years. The goal was to heighten enthusiasm and interest in students who were already inclined toward the sciences. The lectures served up a bit of everything, allowing them to see what college was all about, the kind of instruction they would be receiving, and the level of scientific expertise of their teachers.

Associate Dean of Faculty for the Sciences David Kotz gave a broad brushstroke perspective on the sciences while daily lectures were provided by Craig Sutton, associate professor of mathematics; Jon Kull, Rodgers Professor of Chemistry and dean of Graduate Studies; physicist Stephon Alexander, the E.E. Just 1907 Professor of Natural Sciences and director of the E. E. Just Program; and Farran Briggs, assistant professor of physiology and neurobiology at the Geisel School of Medicine.

“We want to develop personal and leadership skills for tomorrow’s scientists, focusing on the creative and collaborative side of the scientific endeavor,” Alexander says. “Ultimately, we want to increase the diversity of Dartmouth students who matriculate to graduate programs in STEM.”

The first-year students “come here as blank slates, knowing little about campus,” says Almagro-Moreno. “They start hanging out with each other and then meeting with the professors, the postdoctoral fellow, the graduate students, and the upper-class undergraduates, culminating in a circle of collegial friends.” 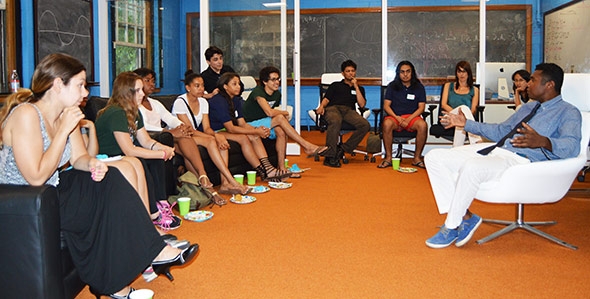 Professor Stephon Alexander, at right, welcomes E.E. Just students and others involved in the Adventures in STEM program. (Photo by Salvador Almagro-Moreno)

Group study sessions and daily office hours helped create a support network for advice and guidance. “I think it’s a great support system,” says Krishan Canzius ’18. “It’s really nice to know that there are people who are looking out for you.”

But it wasn’t all academics. They attended a class in capoeira—a Brazilian martial art that combines elements of dance, acrobatics and music—and visited a gelato shop. These extracurricular activities helped build camaraderie and another support network—one that was internal to the group.

“I liked getting to know the other E.E. Just Scholars before the term began,” says Alex Adams ’18. “Whenever I am walking around campus now, I have people to say hello to and a group of people with whom I can study or eat.”

“There were many things we organized to make sure the DAS program was successful. One of our goals was for them to see each other not just as fellow classmen but also as belonging to a group—a community of E.E. Just Scholars. We believe this will reflect positively in their academic performance and their overall Dartmouth experience,” says Almagro-Moreno. “Now I can walk around campus, talk with the students and see the evident success of the program.”

Ernest Everett Just, Class of 1907, the overall program’s namesake, was one of Dartmouth’s earliest African American graduates and a pioneering cell biologist who made significant contributions to genetics and embryology.

The aim of Dartmouth’s E.E. Just Program is to increase the number of minority and first-generation students majoring in the sciences. The program offers opportunities for undergraduate involvement in research and issues related to minority participation in the sciences.