Jimmy Wu makes molecules—creations that have potential for new drug therapies. He began on this track fresh out of Princeton, working for the pharmaceutical giant Merck—an experience that has colored his career ever since. 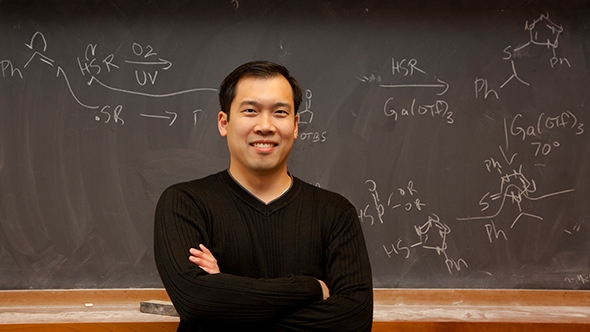 “What I find exhilarating is that we are making new molecules that may never have existed in nature before,” says Jimmy Wu, an associate professor of chemistry. (Photo by Joseph Mehling ’69)

Wu is a synthetic organic chemist—a scientist who constructs complex carbon-based molecules and compounds that can have real-world applications. “More and more of what we do in our research group is moving toward projects that have a biological endpoint,” he says. “Sometimes that means creating molecules that target enzymes or pathways that could potentially treat a disease.

“What I find exhilarating is that we are making new molecules that may never have existed in nature before,” says Wu, an associate professor in Dartmouth’s Department of Chemistry. “Synthetic chemistry is wonderful because it is one of the only scientific disciplines in which the practitioner is creating new compositions of matter.”

Originally from Wayne, N.J., Wu completed his PhD at Harvard and a two-year postdoc at Stanford. He came to Dartmouth in the summer of 2007. “I was really attracted to Dartmouth from the very beginning because I wanted a place where teaching was valued but at the same time be able to have a research group,” he says. “Dartmouth was a good combination of both.”

Wu readily admits that he is enjoying the College and its surroundings. “It’s fun here and I love the skiing, too,” he says. He also enjoys camping in the mountains with his wife, Marjorie, and 5-year-old son, Wolfgang, named for Mozart. “He’s pretty good at piano already,” Wu says proudly.

Wu leads a research group that includes five graduate students, a postdoc, and an undergraduate. “We are interested first and foremost in developing new methodologies for making molecules,” he says. “So our group is actually in the business of inventing new chemical methods.”

Some of the molecular products of their innovative processes are sent for testing to Eli Lilly and Co. as part of the company’s Open Innovation Drug Discovery program, set up to assist academic scientists in identifying molecules that might have therapeutic potential.

One molecule that has come out of Wu’s research group causes certain cells to secrete higher levels of GLP-1, a peptide that directs the pancreas to increase the release of insulin. GLP-1, as a drug by itself, would not be an effective treatment for type 2 diabetes because it can be quickly deactivated in the body by an enzyme known as DPP-4.

Various drug companies have DPP-4 inhibitors that, when combined with compounds that can raise physiological levels of GLP-1, “could be a very powerful combination therapy for type 2 diabetes,” says Wu. An added advantage is that this drug could potentially withstand the rigors of the digestive system. It would not need to be injected, but could be taken orally instead.

“It works on cells in vitro,” he says. “It is many years away from becoming an actual therapeutic but we have a decent start.”

The National Institutes of Health is supporting Wu’s work on this project with a $1.5 million grant over five years, in collaboration with Professor George Holz of SUNY Upstate Medical Center.

The American Cancer Society is funding another of Wu’s research projects with $720,000 over four years. “This involves the synthesis of a molecular compound that causes apoptosis to occur in leukemia cells, faster than any other small molecule that is known,” Wu says. Apoptosis is often called programmed cell death and can be likened to cellular suicide.

“Within one hour of its introduction, significant apoptosis is evident in leukemia cells in the lab. We are collaborating on this with Professor of Pharmacology and ToxicologyAlan Eastman at the Geisel School of Medicine.”

The molecule is derived from a natural product isolated from the rhizomes of water lilies. “There is not enough of the naturally occurring substance to supply the therapeutic needs of patients,” says Wu. “There just aren’t adequate amounts of the lilies to go around, so you still have to synthesize the molecule.”

This is why drugs that are based on natural products often require organic chemists to prepare them in the laboratory, Wu says. Taxol, an established drug used in cancer chemotherapy, was originally isolated from the bark of the Pacific yew tree. “You can only cut down so many yew trees,” he says.