Dartmouth Inducts 22 Into Wearers of the Green

Dartmouth and the Department of Athletics and Recreation inducted 22 new members into the Wearers of the Green in a ceremony after the homecoming football game on Oct. 18. More than 150 people gathered at the Top of the Hop to honor the induction class, including Dartmouth President Phil Hanlon ’77 and Athletics Director Harry Sheehy. 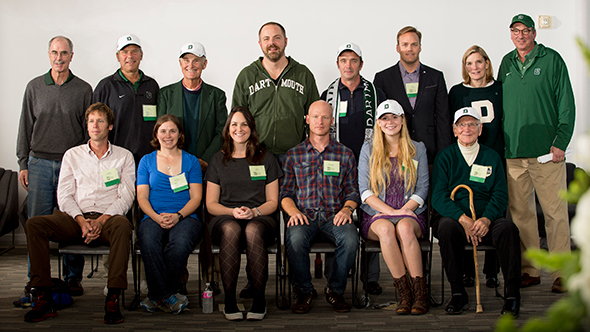 “The student-athlete makes great sacrifices to achieve at the level they do,” said Hanlon to the gathering, “and we know this drive and discipline bodes well not only in terms of their success in competition, but through the entirety of their life. I would offer this esteemed collection of Dartmouth athletes we celebrate today—The Wearers of the Green—as a shining example.”

Wearers of the Green was created in 1984 to honor students, alumni, and coaches who have met specific criteria for athletic excellence in their respective sports. Previously, a ceremony was held in Boston every five years to induct new members. But beginning with this year’s ceremony, new members will be inducted on an annual basis during Homecoming weekend in Hanover.

The induction class and the criteria they satisfied to earn a place in the Wearers of the Green are listed below:

Honorary Wearers•    Cynthia Ginn Biondi ’80: Cindy and her late husband, Mike Biondi ’79, made the lead gift for Red Rolfe Field at Biondi Park in 2008. She has served on the President’s Leadership Council (PLC) since 2001 and Dartmouth Athletics Advisory Board (DAAB) since 2011. •    Bradford Koenig ’80: A former Dartmouth football player, Brad was instrumental in the creation of the DAAB, serving as inaugural chair from 2010-14. He has served on the PLC since 2003 and made a major commitment to endow the head coach of men’s hockey in 2014.