The U.S. Holocaust Memorial Museum in Washington, D.C., plans to unveil a first-of-its-kind Atrocities Early Warning System early next year. The system is a public web project organized in collaboration with Dartmouth government professor Benjamin Valentino and designed by students in the College’s DALI Lab. 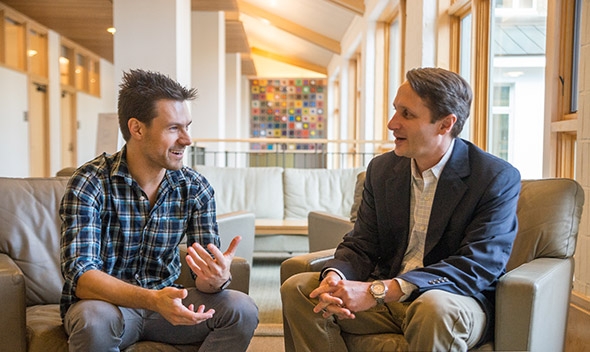 The project, an initiative of the museum’s Center for the Prevention of Genocide, will make state-of-the-art data modeling and expert risk analysis freely available for the first time. The aim is to give anyone, including governments, advocacy groups, non-governmental organizations, and at-risk populations, reliable predictions of potential mass killings and victimization of civilians, to create more opportunities for action.

Valentino, coordinator of the War and Peace Studies Program at the John Sloan Dickey Center for International Understanding, has focused his research on genocide and mass killing since the time of the 1994 Rwandan genocide. His work includes the 2004 publication of the book Final Solutions: Mass Killing and Genocide in the 20th Century.

In 2011, the museum sponsored a research project to develop an accurate early warning system and invited Valentino to convene an interdisciplinary group of experts to imagine how an early warning system would work. The idea was to create a completely open risk-analysis system built on the massive amounts of public data available from institutions such as the United Nations, the World Bank, and the World Health Organization, and drawing on expert opinion from analysts and academics around the world.

“The idea is that everything is transparent, all code is open source, the data modeling methods are clearly documented and available to everyone, experts can communicate with each other, and everything is tracked over time,” he says. “The whole conceit is that we hope people around the world will tell us where we’re wrong. … There is no right answer. What we want is the best possible prediction.”

Enter DALIThe challenge Valentino and others faced was how to make a huge amount of data and information comprehensible to the broadest possible audience. That’s where Dartmouth’s Digital Arts Leadership and Innovation lab, better known as DALI, comes in.

The Atrocities Early Warning System website features an interactive navigational map that illustrates the projected risk of mass atrocities by country, with a color scale from red for highest risk, to dark blue for lowest risk, based on a broad range of statistical models and expert opinion.

Supported by The Neukom Institute for Computational Science and the Department of Computer Science, the DALI Lab matches undergraduates with real-world projects that focus on communicating complex ideas and data in meaningful ways, using a mix of technology and design.

Valentino and Jay Ulfelder, the project director for the U.S. Holocaust Memorial Museum, brought the idea to the DALI lab last spring shortly after the DALI lab’s official opening.

“It was one of our first big projects,” says Lorie Loeb, a research professor in computer science and co-founder of the lab.

“They came in with a lot of information and asked, ‘Can you help us make this something people can share and understand?’ ” she says. Loeb put a group of five undergraduates and the lab’s technical director Tim Tregubov ’11, a graduate student, on the task.

The inaugural Leila and Melville Straus 1960 Family Symposium, sponsored by the John Sloan Dickey Center for International Understanding on October 6-7, will explore innovative new methods and technologies for generating early warning of mass atrocities including genocide and other large-scale crimes against humanity.

Sarah Sewall, under secretary of state for civilian security, democracy, and human rights will deliver the keynote address in Filene Auditorium at 3:40 p.m., on October 6. Prior to her position in the State Department, Sewall served as a senior lecturer in public policy at John F. Kennedy School of Government at Harvard University. In 2012, she was Minerva Chair at the Naval War College, and from 2006 to 2009 she served as the director of Harvard’s Carr Center for Human Rights Policy.

Scott Straus, professor of political science and international studies at the University of Wisconsin, Madison, will deliver opening remarks at 3:30 p.m. Straus, author of the forthcoming book: Making and Unmaking Nations: War, Leadership and Genocide in Modern Africa, will celebrate the life of his father, the late Melville “Mickey” Straus ’60, an alumnus, art lover, and businessman whose gift made the symposium series possible.

The Straus family established the gift through the Dickey Center to support efforts “to produce the best understanding and analysis of central international issues with collaborative research on complex problems, with a preference for topics that include war and peace studies, conflict resolution, international governments, and human rights.”

On Tuesday, participants will attend a series of technical workshops on the topic of “Improving Forecasts of Mass Atrocities.”

“The data scientists calculate risk prediction, but how do you show it to the world to communicate these numbers?” Tregubov says. “We brainstorm idea visualizations. We saw everything on the site related to risk by country. So the central component is the map, a choropleth, which shows each country on a scale from red to blue based on risk levels.”

On the site, the map is a navigational tool. When users click on a country, the site displays relevant material. There is also a blog where analysts can share ideas and opinions, and other graphic displays of countries’ risk factors that show risk levels based on three data modeling systems and the overall average.

“You can play with the variable. You can dig down and see how GDP, the presence of minority and religious factions, or infant mortality, trend in that country,” Tregubov says. “Then you can adjust. It might be interesting to see that lowering infant mortality in a country changes the overall risk estimate.”

Valentino calls the prototype DALI developed “tremendous,” and notes that the open source development will allow it to evolve and adjust over time. After DALI delivered the prototype to the museum, Ulfelder turned it over to a commercial web design firm.

Valentino said the Atrocities Early Warning System project is planning a soft launch of the website in November, so that a broader group can begin working with the system and offer feedback and suggestions to improve it. The project has already launched a blog that follows the development of the site and addresses the risk of atrocities around the world.

Valentino says the hope is that the system will create a focus for institutions and individuals to respond to imminent danger.

“Early warning doesn’t prevent anything,” he says. “But it is a necessary part of prevention.

The hardest part is to develop the political will to do something about it. Even if we don’t send in the Marines, there can be better preparation for refugees. Diplomacy can start earlier and with greater effort, and advocacy groups and affected populations have a tool to raise the alarm.”