Professor Ross Virginia, whose work focuses on climate change and the effect of rapid warming on the polar regions, was selected by the U.S. State Department as one of two distinguished scholar leaders of the newly established Fulbright Arctic Initiative. 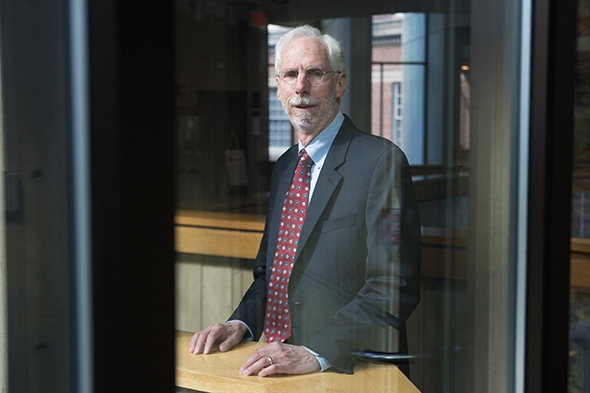 Ross Virginia, the Myers Family Professor of Environmental Science and director of the Institute of Arctic Studies within the John Sloan Dickey Center for International Understanding, has been named co-lead scholar for the new Fulbright Arctic Initiative program. (Photo by Eli Burakian ’00)

Virginia, the Myers Family Professor of Environmental Science, and Professor Michael Sfraga, a geographer and vice chancellor for university and student advancement from the University of Alaska Fairbanks, will take lead roles in the new Fulbright Arctic research program, which will fund interdisciplinary work for some 16 scholars from the eight countries that sit on the Arctic Council, an intergovernmental forum of the eight member states that border the Arctic Circle.

Canada, Denmark (including Greenland and the Faroe Islands), Finland, Iceland, Norway, the Russian Federation, Sweden, and the United States hold seats on the council, which is dedicated to addressing international policy questions presented by changes in the polar region, including depletion of sea ice. Issues before the council include the opening of oil and mineral rights, regulating new shipping routes, protecting the environment, and maintaining the rights of indigenous people and other populations in the Arctic.

The new program comes at a key time, says Virginia, as the United States assumes the rotating chairmanship of the Arctic Council in April 2015.

“We’ll have scholars from all the Arctic nations, from a variety of disciplines, and the challenge for this Fulbright program is to ask questions that are relevant to solving these problems,” Virginia says. “We need to develop research questions and themes for these teams of scholars that generate knowledge that will be useful to policy makers and the U.S. as chair of the Arctic Council.” 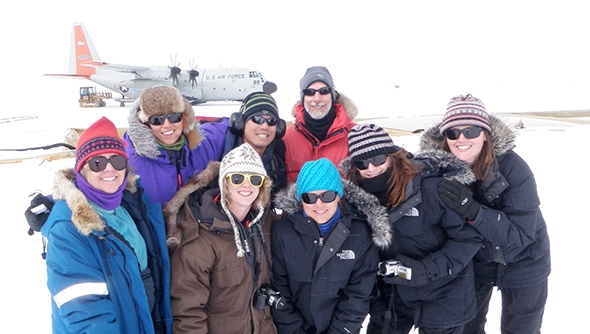 Mark Brzezinski ’87, the U.S. ambassador to Sweden, a Fulbright alumnus, and a former member of the board of overseers for the State Department program, announced the Arctic initiative Oct. 14 on the MSNBC program Andrea Mitchell Reports.

“I am just thrilled the initiative is going forward,” Brzezinski says. “The Arctic region is an emerging frontier in which we have vital national interests. While taking advantage of economic opportunities in the Arctic, we must ensure we do not exacerbate climate change or environmental degradation. What happens in the Arctic affects everyone on Earth due to the region’s impact on global weather patterns and sea levels.”

Mark Brzezinski ’87, the U.S. ambassador to Sweden and a Fulbright alumnus, has for years been deeply involved with Arctic issues, particularly policy questions related to climate change and Arctic populations that are now before the intergovernmental Arctic Council.

“President Obama and Secretary Kerry have both affirmed that a secure and well-managed Arctic marked by international cooperation is a key priority of the U.S.,” Brzezinski says. “After all, we must take into account the well-being of the 4 million people whose lives are affected by the rapidly changing conditions in the Arctic, including 50,000 Alaskans who live and work above the Arctic Circle.”

Sweden, like the U.S., is one of eight member states that sit on the Arctic Council. Brzezinski recently hosted a panel discussion in the embassy in Stockholm titled “Looking North— Challenges and Opportunities of Sustainably Developing a Changing Arctic,” which included participation by the Swedish Polar Research Secretariat, the National Geographic Society, and a representative from the Sami people, a reindeer-herding community in northern Sweden.

Brzezinski stressed the timeliness of a broad discussion of international issues related to the polar regions as the United States prepares to take over as chair of the Arctic Council.

“In April 2015, the U.S. will assume the chairmanship of the Arctic Council, which is an intergovernmental forum that operates by consensus, for two years,” Brzezinski says. “During this time, the U.S. government will undertake new initiatives to help address the many challenges we face in the region.”

The Fulbright Arctic Initiative scholars will work on advanced research and collaborative study, with guidance from co-leaders Virginia and Sfraga, for 18 months in 2015-2017, coinciding with the United States’ chairmanship of the Arctic Council. The participants will be selected from the eight Arctic Council states through an open, merit-based competition.

“Fulbright has a long and prestigious history as the premier U.S. educational, research, outreach, and public diplomacy program,” says Sfraga. “The decision by Secretary of State Kerry and the State Department to establish the Arctic Fulbright Initiative underscores the importance the U.S. places on engagement and informed management of the Arctic at a time of rapid change that presents both challenges and opportunities.”

Later this month, the U.S. State Department will officially open the program, accepting applications from scholars from the eight Arctic Council member states. Areas of research focus will include climate change, water, energy, health, and infrastructure, among others, according to the Fulbright program overview.

“The Scholars will come from different countries and different fields but will share a commitment to working together to understand and address Arctic issues,” Brzezinski says. “We hope that this new Fulbright initiative will help strengthen our partnerships with fellow nations of the Arctic Council as well.”

“As a Dartmouth alumnus, I’m so proud that Dartmouth Professor Ross Virginia and Professor Mike Sfraga of the University of Alaska Fairbanks will serve as leaders of the new Fulbright Arctic Initiative,” he says.

Virginia, director of the Institute of Arctic Studies within the John Sloan Dickey Center for International Understanding, has focused his studies on polar environments for more than two decades. He says the Fulbright Arctic Initiative presents an exceptional opportunity not only for scholarship, but also for international and interdisciplinary collaboration.

“The sheer dynamism that Ross Virginia has brought to the Institute of Arctic Studies has been incredible. The Dickey Center in particular—and Dartmouth more broadly— are lucky to have him here and so fully engaged,” says Daniel Benjamin, the Norman E. McCulloch Jr. Director of the Dickey Center. “Ross has taken Dartmouth’s historic strength in polar studies and built on it in a way that has brought benefits across a range of disciplines. He has helped put Dartmouth at the cutting edge on climate, energy, indigenous cultures, and the like.”

And the Fulbright program will allow Virginia to support young scholars and colleagues in environmental science and policy research that has driven his work for many years. “What we’re really looking at with this program is the Arctic future—contributing to a more sustainable and a better future for the Arctic,” he says.

Says Brzezinski, “Promoting international understanding is consistent with the values of the Dickey Center and Dartmouth, and I cannot wait to see what Professors Virginia and Sfraga do with their new role. Congratulations to them.”

On Nov. 5, Brzezinski will host the alumni event “Dartmouth, the Arctic, the Future” at the embassy in Stockholm with a panel discussion of Arctic issues. Participants will include: