Read the full story by Susan Green, published in the Fall 2014 issue of Dartmouth Medicine.

Two teams take the field to face familiar foes: Drugs. Alcohol. Unprotected sex. Older sexual partners. Their goal is to dribble a soccer ball between cones without bumping into them. One bump and it’s off to the sidelines to do 10 push-ups. A second bump and the entire team has to do push-ups. A third bump, and everyone is doing push-ups. At the game’s conclusion, the teams and their coach gather to talk about the risks the cones represent. 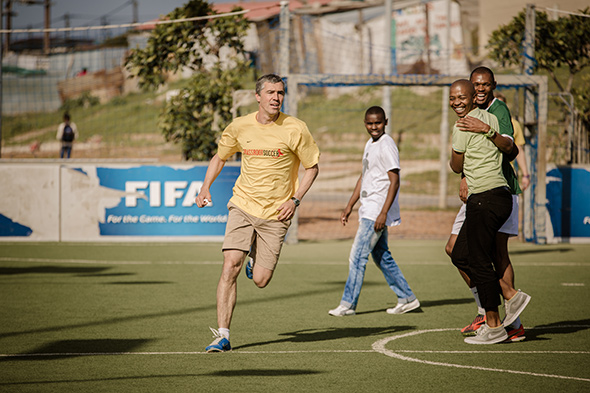 The game, called Risk Field, is one of many activities designed by the international nonprofit organization Grassroot Soccer (GSR). Its goal is to teach adolescents in southern Africa about the consequences of their actions and how being HIV-positive affects not only their lives, but also the lives of their families and their communities.

Tommy Clark ’92, MED ’01, the founder of GRS, knows that passion for soccer runs deep in Africa. He spent his high school years in Bulawayo, Zimbabwe, playing soccer, and he saw the admiration and respect people had for both the game and the players. Clark’s life is rooted in soccer. His father, Bobby Clark, played on the national team in Scotland and went on to coach professional teams in both Scotland and Zimbabwe. The Clarks left Zimbabwe for Hanover, N.H., when Bobby became a coach at Dartmouth. Tommy later attended Dartmouth and played on the soccer team while there. After graduating from Dartmouth, Clark returned to Bulawayo to play on the local professional team and to teach English. But the Zimbabwe of Clark’s youth had changed. AIDS was rampant and taking a devastating toll on the population.

Zimbabwe is one of the hardest hit countries in terms of HIV prevalence. The numbers are stark: By 1997, the peak of the HIV/AIDS epidemic, 27 percent of Zimbabwe’s population was HIV-positive, the highest rate of HIV in sub-Saharan Africa, according to United Nations Programme on HIV and AIDS. And the infection rate remained above 25 percent for the next several years before gradually declining. Sexual activity among adolescents in southern Africa, both then and now, is on par with adolescents in Denmark and Sweden, which have some of the lowest prevalence rates of HIV in the world. In Denmark in 2003, the rate of infection was less than one percent. But due to a variety of factors, including older sexual partners, which correlates with dangerous gender norms fueled by poverty and inequality, overlapping sexual partners, and the fact that the HIV strain in southern Africa is highly infectious, the region has much higher infection rates.

Yet despite the prevalence of HIV/AIDS, nobody talked about how it spread or how it could be prevented, Clark says. Puzzled and deeply affected by this, he began thinking about how to change the stigma surrounding the disease. Without breaking down the stigma of HIV, there would be little chance for lasting change.