Read the full story by Jennifer Wulff ’96, published in the November/December 2014 issue of Dartmouth Alumni Magazine.

News from Mary Flanagan and Tiltfactor Laboratory On Oct. 29, Tiltfactor hosted the inaugural 2014 open webinar on crowdsourcing for libraries, museums, and archives. The program, “Crowdsourcing 101: Fundamentals and Case Studies,” is a project of the Crowdsourcing Consortium for Libraries and Archives (CCLA), which works to unite leading-edge technology groups in libraries and archives as well as humanities scholars and scholars from the sciences in a conversation about best practices, shared tool sets, and strategies for using crowdsourcing. The consortium is funded by an Institute of Museum and Library Services (IMLS) award. The webinar drew 187 registrants, representing 42 states including Alaska, as well as Canada, England, Scotland, and Australia. Registrants came from organizations that ranged from public, private, academic, and federal libraries and archives to medical centers, government agencies, commercial vendors, and inquisitive citizens. In September, the National Science Foundation awarded Flanagan a three-year, $1.1 million dollar grant to research and develop interactive narrative technology for use by students and instructors in undergraduate science, technology, engineering, and mathematics (STEM) classrooms. Flanagan’s collaborator on the grant is social psychologist Melanie Green of the University at Buffalo. Tiltfactor postdoc Geoff Kaufman will also be part of the Dartmouth research team. The funded project, called “INTRINSICS: An Interactive Narrative Technology for Classrooms in STEM,’’ addresses the experiences of college students in introductory level science courses. Tiltfactor’s authoring software will allow the students to make interactive fictions about their experiences with science, class, labs, and college life generally. While much research has pointed to the power of fiction in transforming readers’ real world behaviors, this is the one of the first studies centering on interactive fictional accounts of personal experiences, and the first to use fiction to transform real world STEM environments for students and instructors. Flanagan is currently in residence as a Brown Foundation Fellow at the Dora Maar House in Ménerbes, France, a program administered by the Museum of Fine Arts, in Houston. Flanagan led Dartmouth’s film and media studies foreign study program (FSP) in Edinburg, Scotland, during summer term 2014. In September, she was the Distinguished Visiting Fellow for 2014-2015 at the University of Toronto’s Jackman Humanities Institute.

First, let’s get something out of the way. Mary Flanagan, Dartmouth’s digital humanities chair and founder of the game design and research lab Tiltfactor, could expound for hours on the history of games and the psychology and design of them, whether it’s Tic-Tac-Toe or Angry Birds, but she is not interested in yet another conversation about violence in video games. “It’s the first question the media has asked me in my entire career,” she says. “And I think it’s a little weird.” (For the record, this reporter waited until at least 40 minutes into the interview.) “I suppose that if games can be used as a tool for good, one could argue that they could also be a tool for the not-so-good,” she adds. “But I’ll leave that for other folks to spend time on.” 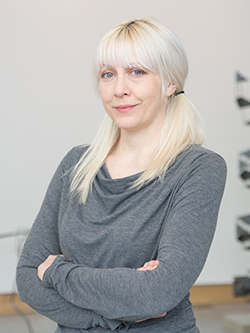 Mary Flanagan is the Sherman Fairchild Distinguished Professor in Digital Humanities, a professor of film and media studies, and director of the Tiltfactor Laboratory. (Photo by Eli Burakian ’00)

She’s got more important things to do. Arriving at Dartmouth in 2008, Flanagan, whose full title is the Sherman Fairchild Distinguished Professor in Digital Humanities, was hired by then Dean of Faculty Carol Folt to shake things up at the College and help steer it toward a future that includes a more interdisciplinary approach to teaching. Working across multiple fields in the arts and the sciences, Flanagan is now known across campus for far more than just her trademark pigtails. “In terms of research, the most exciting questions now are in the margins of all the disciplines. Bridging those areas is risky and difficult and takes a lot of energy, but Mary is absolutely amazing at navigating it all and making it look easy,” says Professor Ross Virginia of the environmental studies department. “She’s a rock star. There’s no other way to put it. An academic rock star.” President Phil Hanlon ’77 has been a fan since he arrived in Hanover. “One of the key ambitions I began talking about, really from day one, was that I want Dartmouth to think big—to imagine a future where our faculty and students are forging new knowledge and innovating in the areas between the traditional disciplines, in the spaces where those disciplines overlap,” he says. “Mary’s work receives the interest and attention it does, as well as lines of students eager to get into her classes, not only because it captures the imagination, but because it is an example of the academy taking on complex societal challenges and unleashing the creativity and potential of our students in the process.” For her part, Flanagan is grateful to be at a place where she isn’t simply alternating between delivering lectures and sitting at a desk grading papers. “The direction Hanlon wants to go in with experiential learning is how I like to teach,” she says. “Getting out in the world, trying things and seeing how they work. I can’t just teach one class for the rest of my life.”