Hanlon Inducted Into American Academy of Arts and Sciences

President Phil Hanlon ’77 has been inducted into the American Academy of Arts and Sciences.

President Hanlon was named a fellow in the prestigious society last year and was among five fellows from last year’s class who were inducted along with 164 new fellows at a ceremony earlier this month in Cambridge, Mass., where the Academy is based. 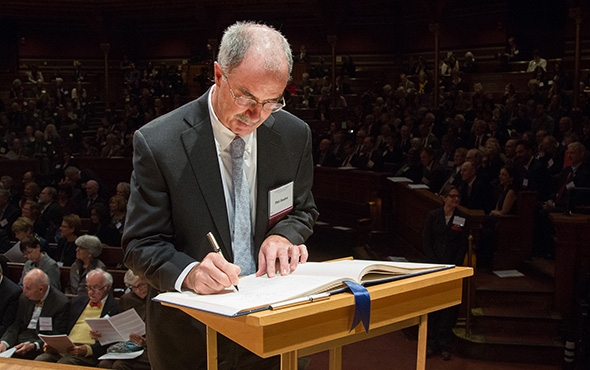 “The induction ceremony recognizes the achievements of today’s most accomplished individuals,” says Academy President Jonathan Fanton. “The distinguished women and men who were inducted have engaged in innovative research, examined every aspect of our society, and continue to pursue solutions to the most pressing challenges of the day. They are all leaders of the respective fields and the Academy offers them an opportunity to work together to advance the common good.”

Founded in 1780, the Academy is one of the nation’s oldest and most prestigious learned societies, and an independent research center that draws from its members’ expertise to conduct studies in science and technology policy, global security, the humanities and culture, social policy, and education. It recognizes some of the world’s most accomplished scholars, scientists, writers, artists, and civic, corporate, and philanthropic leaders.

In addition to Hanlon, previously elected Academy members with current Dartmouth affiliations are: John Carey, the John Wentworth Professor in the Social Sciences, professor of government, and chair of the government department; Kenneth French, the Roth Family Distinguished Professor of Finance, Tuck School of Business; Elsa Garmire, the Sydney E. Junkins 1887 Professor of Engineering; William Wickner, the James C. Chilcott Professor at the Geisel School of Medicine, and professor of biochemistry; Christian Wolff, professor of classics emeritus and the Strauss Professor of Music Emeritus; and President Emeritus James Wright.

Since its founding by John Adams, James Bowdoin, John Hancock, and other scholar-patriots, the Academy has elected leading thinkers and doers from each generation. The current membership includes more than 300 Nobel laureates, some 100 Pulitzer Prize winners, and many of the world’s most celebrated artists and performers.