Out of the Archives and Into the Street

This past month, passers-by in the streets of Cuzco, Peru, saw double. For the city-wide exhibit El Cusco de Martín Chambi, 32 images of the city taken by world-renowned indigenous photographer Martín Chambi early in the 20th century were enlarged and set up around the city—“in the very spaces and whenever possible from the very angles where Martín Chambi took them,” says Silvia Spitta, a professor of Spanish and of comparative literature and the Robert E. Maxwell 1923 Professor of Arts and Sciences. 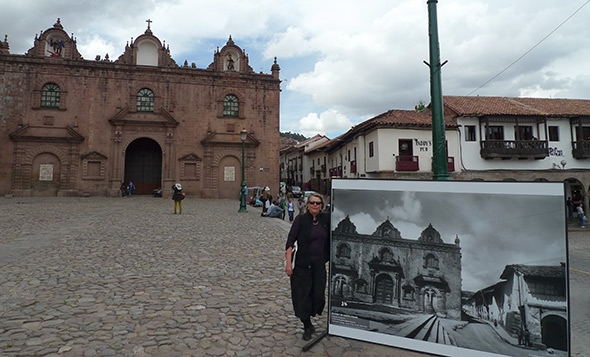 Spitta’s work with the Chambi archive was supported by an award from the Office of the Dean of the Faculty’s Scholarly Innovation Fund, and involved preserving and cataloging the archive’s holdings. At the same time Spitta “intervened” in the archive to make its holdings accessible to the public at large.

For the city-wide exhibit, Spitta and Teo Allain Chambi, the photographer’s grandson and archivist, selected photographs to enlarge and display, juxtaposing the century-old images with the here-and-now. The idea, she says, “was to confront Cuzco’s inhabitants with the city as it had been before it became a World Heritage Site in 1983, before the devastating 1950 earthquake, and before it grew from a city of 50,000 to one of nearly 500,000.”

The exhibit revealed radical change in Cuzco, but not, says Spitta, precisely what she and her collaborators expected. “We started out expecting that the photographs would show the devastation effected on the city by the arrival of mass tourism.”

In fact, they found, monuments and Inca structures had been substantially preserved. The changes brought about by increased tourism, she says, were actually manifested in the emergence of an “Incan” style of architecture still prevalent today. Now, however, “the city is divided into the World Heritage site—often financially inaccessible to many of the city’s inhabitants—and the growth of rings of urbanization around the historical core which have been built with little to no city planning.” 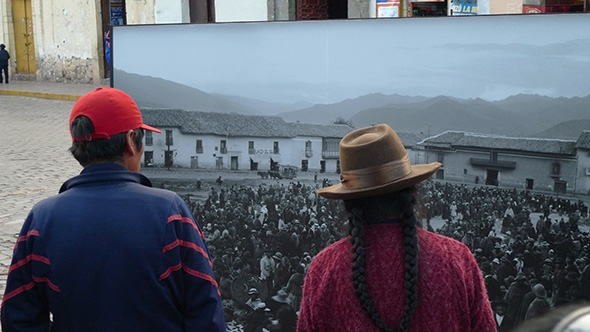 Passers-by in Cuzco study the changes in the town since Martín Chambi photographed its buildings and people during the early 20th century. (Photo courtesy of Silvia Spitta)

The greatest catalyst for change, Spitta says, was the ripping out of the tram rails to make room for cars, which closed many streets to pedestrian traffic, “gutted entire areas,” and today contribute to pollute the already too-thin air of this city at over 10,000 feet.

The exhibit’s timing had a certain serendipity as well. It was scheduled to avoid both the region’s rainy season and the height of the tourist tide. However, says Spitta, “we did not take into account that it was election time and the city was littered with political slogans and candidates’ photographs. While we regretted our oversight, it turned out to be plus for our exhibit because people who looked at the photographs usually commented on how ‘pristine’ they were, how focused, sharp, and clean.” While that is a trademark of Martín Chambi’s photography and one reason he is considered a master of the Cuzco school of photography, there may be another reason as well, Spitta says. “I think people’s awe was also due to the contrast they saw between the former city and the one full of visual garbage today.” In fact, as testimony to the respect the exhibit elicited, she says, not one of the photo exhibits was defaced either with graffiti or political propaganda during the month the exhibit was up. 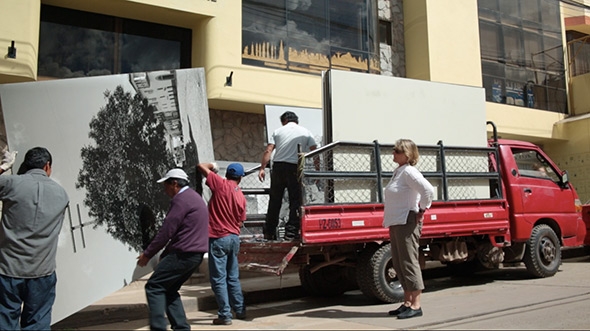 The power of people’s engagement with the photos was unexpected and gratifying, Spitta says. “While my original idea had been to make available the holdings of an archive that are otherwise not available to the greater public and in particular to residents not likely to enter museums or art galleries, what I had not anticipated but witnessed every day was the power and importance of public art,” she says. “The fact that the photographs were set up in the streets allowed people to stand in front of the images for long periods and engage with others. Elderly inhabitants were especially helpful in aiding the younger generations puzzle out the sometimes radical changes the city had undergone.” The large formats also made the smallest details visible, the scenes within scenes that make Chambi’s photographs so memorable.

El Comercio, Peru’s national newspaper, estimated some 17,000 people saw the exhibit in the first two weeks. Given this visibility, Spitta hopes to continue doing this type of work with the support of national foundations.

While the photos have been given to the institutions that supported the exhibit, Dartmouth students will have the opportunity to see the places Chambi photographed and to visit the archive: The Department of Spanish and Portuguese will offer a new Language Study Abroad (LSA+) in Cuzco in Fall 2015.