Change on a historic scale has come to higher education, said Executive Vice President Richard G. Mills at a town hall meeting Thursday, October 9, and he vowed to host a forum on a regular schedule to foster a broad conversation about Dartmouth’s future. 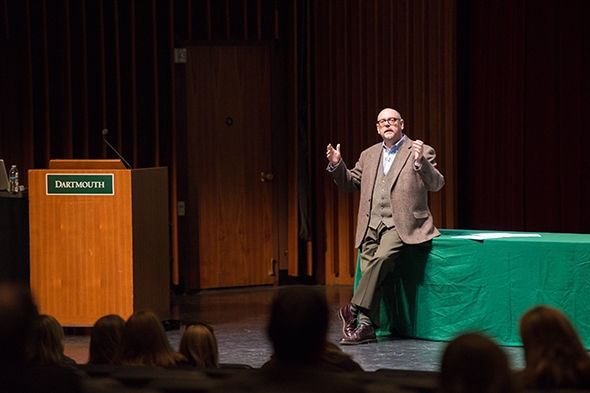 Staff and other members of the community turned out for the late morning forum in Spaulding Auditorium to hear Mills’ thoughts on his first year at the College and a discussion of the administration’s vision for the future. Mills had invited the faculty, staff, and students of the College and its three graduate schools to join him for this first open session.

Mills, who majored in history before going on to a career in law, public utilities, and eventually higher education, offered some historical perspective. Liberal arts education, he said, has been “a touchstone of constancy for the nation,” not subject to flights of fancy or fads. The idea that a college education was the path to success was not questioned, and for decades, tuition, endowments, grants, and gifts grew steadily.

Today, families are weighing the cost of tuition against the economic value of a broad education in a new world that includes free online education, increased specialization, and a roster of renowned college dropouts that includes names like Jobs, Gates, and Zuckerberg.

In periods of growth, nonprofits are bound to reinvest net gains, Mills said, referencing a community course on Dartmouth’s budget that he taught last fall with President Phil Hanlon ’77. “It means as the money grew, we grew programs, and when it finally stopped, we still had a lot of programs.”

And that sort of change, common in higher education today, is “not a notch in the trend,” Mills said. “It is a change in trajectory.”

A place of deep tradition, Dartmouth has already undergone huge changes in a very short time, including four presidents in as many years, he said. “You have come through some tough stuff and done it beautifully.”

The way forward is for the administration, faculty, and staff to engage in a discussion, to take risks, to learn from failures and share success, he said, and that comes through conversation with the whole community.

“I pledge in these town halls to be as open and transparent as I can,” Mills said.

“I’ve been known for speaking my mind . . . sometimes to a fault,” Mills said, inviting community members to come back next time and speak their minds.

“I’m going to keep doing this until somebody yanks me off the stage,” he said.