Wetlands Restoration: A Give and Take Proposition

Wetlands giveth and wetlands taketh away. On one hand, wetlands are a sink, locking up the greenhouse gas carbon dioxide. On the other, wetlands release methane, another greenhouse gas. Jaclyn Hatala Matthes studies this duality, its causes, effects, and potential solutions. 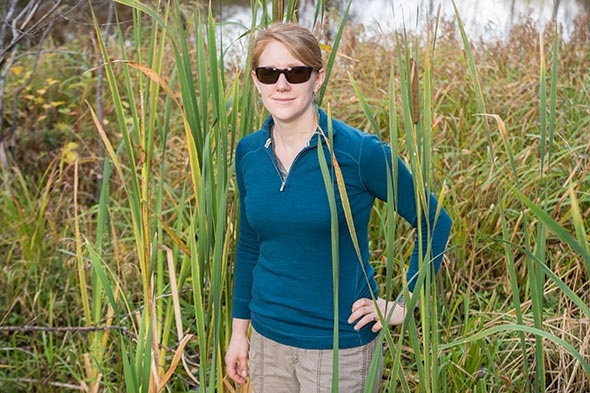 Professor Jaclyn Hatala Matthes is applying her wetlands ecology expertise to the banks of the Connecticut River, a project on which she plans to engage Dartmouth students. (Photo by Eli Burakian ’00)

“We are trying to measure the tradeoffs between CO2 (carbon dioxide) uptake and methane release when you are restoring wetlands,” says Matthes, an assistant professor in the Department of Geography and the Ecology and Evolutionary Biology Graduate Program.

Matthes, who joined Dartmouth on July 1, came to Hanover after a year as a postdoc at Boston University following her PhD work at the University of California, Berkeley. Her enthusiasm for Dartmouth is scarcely contained. “This is my dream job—a fantastic institution, well supported, and the students are motivated and interested in environmental issues.

“I enjoyed what teaching I did at Berkeley and I am excited about doing more. One of the most exciting things about being a scientist is to be able to share your work with other people, and who better than undergraduates who are engaged in trying to understand the ways in which our world is rapidly changing.”

Matthes has coauthored a paper that appeared online in September in Global Change Biology. With her California colleagues, she investigated the consequences of human activities on wetlands in California’s Sacramento-San Joaquin River Delta.

“River deltas are some of the most productive agricultural lands in the world, going all the way back to ancient Mesopotamia and the Nile,” she says. “The California Delta was a huge area of wetlands but, after the gold rush, people settled the area and started to drain the wetlands for agriculture. This is a process that happens worldwide.”

“We do expect that the methane emissions will stabilize over time,” she says. “We’ve seen that emissions tend to increase for the first few years, and that this increase is correlated with the increase in wetland plant growth and spread during this time.”

The study team installed monitoring equipment on three moveable four-meter towers, measuring CO2 and methane concentrations above a pasture, a cornfield, a rice paddy, a newly restored wetland, and a wetland that underwent restoration in 1997.

“This is one of the first studies to measure on a continual annual basis the transformations and fluctuations of carbon as it cycles through wetlands,” says Matthes. “We are part of a global network of scientists doing this over many years to better understand long-term processes.”

In another paper published in the Journal of Geophysical Research—Biogeosciences in July, Matthes and her co-authors analyzed the correlation between wetland methane emissions and vegetation around the tower, where more plants resulted in an increase in methane emissions. Where the vegetation patches had more “edges”—convoluted borders—the methane emissions were lower.

“We are doing this kind of analysis looking at the structure of vegetation patterns that might help to inform management goals for a restored wetland, how big do you want the vegetation patches to be, how much edge they should have,” Matthes says. “It’s a little bit tricky in ecosystem engineering but we are hoping to learn some things about how people might plan wetland vegetation in order to maximize CO2 uptake but minimize methane release.”