Joe Indvik ’10 is a self-described “energy-efficiency nerd,” but he didn’t start out that way. In his own words, the entrepreneur and Boone, Iowa, native arrived at Dartmouth as a climate change skeptic. 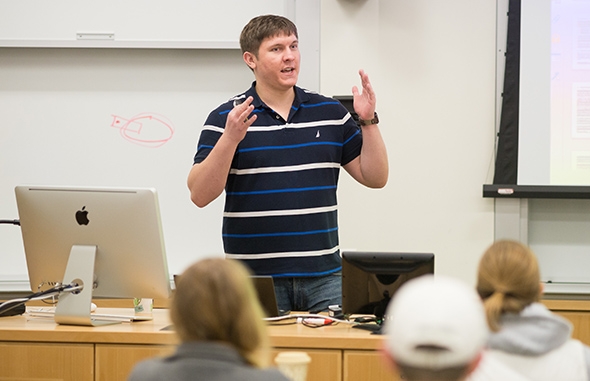 “My natural reaction was, how could a relatively insignificant species of mammal alter a 4-billion-year-old, complex geologic system enough to actually do damage?” Indvik recalls. “There was also a bit of optimism in there—I didn’t want to believe it.”

But after numerous discussions with Dartmouth friends who “established a beachhead in my mind,” Indvik reconsidered his stance—and his career ambitions. “I’ve always been an idealist, but I try hard to be a pragmatist,” he says. “If you see sufficient evidence for a claim, you have to believe it. By my junior year, with the overwhelming scientific consensus about climate change, I had no choice but to spend the rest of my life working on it.”

Indvik, who majored in economics modified with environmental studies, with a minor in classics (“Paul Christesen’s course on Alexander the Great was my favorite—really valuable, traditional, liberal arts–style critical thinking”), has held to his commitment to the cause, though in his own way.

“I knew I wanted to work on climate change, but not from a traditional environmentalist perspective,” he says. “I wanted to use my skills with quantitative analysis and my love of building new ideas and services. I’m drawn to problems for which the solution is in the nitty-gritty details.”

This past February, Indvik and three other co-founders, including Nick Devonshire ’11, launched SparkFund, a Washington, D.C.-based start-up that tackles a big piece of the problem: the financing of small- to mid-sized energy-efficiency upgrades. (Other Dartmouth-SparkFund connections include former Google executive and U.S. Assistant Secretary of Energy Dan Reicher ’78, who serves on the fledgling company’s board of advisers.)

“Financing is the biggest barrier to getting energy efficiency done at scale,” Indvik told a packed Sustainability Solutions Café gathering (funded by the Porter Family Fund for the Sustainability Minor) in Collis 101 on Nov. 7. He was there to present SparkFund’s business model to students, faculty, and members of the Upper Valley community. He noted that the United States alone has a potential $400 billion market in untapped efficiency projects. This market, he says, is “the key to climate change,” with a potential to cut nontransportation greenhouse gases by 23 percent.

Half of these potential projects are under $1 million in cost, he says, and “60 percent of those small projects can’t get financing”—representing a potential small-project market of about $120 billion. SparkFund’s mission is to unlock that market. “We want to turn energy efficiency into an asset class that a wide range of investors have access to.”

SparkFund, currently finalizing its Series A round of investment, works with contractors to provide simple leasing solutions to customers with small commercial efficiency projects. SparkFund’s website offers user-friendly tools, including a lease-pricing calculator to help customers visualize savings and customize lease terms, and a 48-hour turnaround on financing approval. The company’s first project is scheduled to start this winter, and the team has projects lining up in Washington, D.C., as well as Ohio, New York, Massachusetts, New Hampshire, Vermont, and several other states. “Because we’re so technology-enabled, we can go anywhere within the U.S.,” Indvik says.

Indvik first learned about financing energy efficiency at Dartmouth, where he was part of a group of “Environmental Studies 50” students who successfully proposed the $1 million Dartmouth Green Revolving Fund to support energy-efficiency and renewable energy infrastructure upgrades on campus. The group met with College administrators, including then-CFO Steve Kadish. “We were proposing a conservative approach—a $10,000 fund to finance high payback lighting upgrades. The CFO said, ‘I’d like to see you be a little more ambitious—how about $1 million?’ At that point we started taking it a lot more seriously.” After graduation, Indvik and classmate Bari Wien ’10 stayed on campus as consultants on the project.

Now Indvik enjoys returning to campus to maintain his connections with mentors like Anne Kapuscinski, the Sherman Fairchild Distinguished Professor of Sustainability Science, and to form new connections with current students.

“Dartmouth students are some of the most entrepreneurial people on the planet,” Indvik says. He’s encouraged by Dartmouth’s recent investments in student entrepreneurship, including the DEN, the College’s undergraduate Innovation Center and New Venture Incubator. But he hopes the College will continue to do more to help students connect “real world skills and academic understanding. You need both theory and practice to be a meaningful entrepreneur.”

And his goal for SparkFund? “There’s a huge, economy-wide opportunity to invest in efficiency, and we don’t want to stop expanding until we’ve captured a significant chunk of that. We plan to go big or go home.”