Analysts Say Democrats Are Culpable in Loss of Senate

Tuesday’s midterm election wave, which gives Republicans control of the U.S. Senate, proved that a national strategy of running against an unpopular president is effective, Dartmouth political analysts say—but they say it worked this time only because the Democrats let it work. 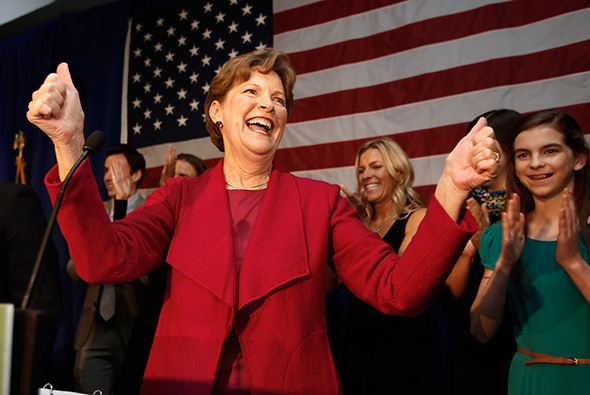 “If the truism that all politics is local is out the window,” says Charles Wheelan ’88, a senior lecturer in economics, “so is the idea that people vote their pocketbooks. By and large, voters are dramatically better off. Unemployment is down, debt is down, gas prices are at record lows, and the stock market is soaring.”

Linda Fowler, professor of government and the Frank J. Reagan ’09 Chair in Policy Studies Emeritus, says she was surprised by the broad gap between substantial economic gains over the past six years and the level of voter dissatisfaction.

“I don’t know if it’s that the Democrats never made the case for the fact that things are actually better, or whether the narrative that the Obama administration is overreaching, underperforming, tyrannical, weak, or take your pick was just pounded in with so many ads, it was too powerful for the hard numbers to kick in,” Fowler says.

Wheelan says the Democrats, for the most part, failed to defend themselves. “I think it reflects poorly on the Democrats’ ability to craft their message.”

But as the Republicans take control of the House and Senate, they will be faced with the question, “What now?” says Brendan Nyhan, assistant professor of government.

Several Dartmouth alumni had a good night on Tuesday, gaining and holding a number of political seats:

“The broader choice Republicans have to make now is whether there are any deals they are willing to cut with the president and the Democrats,” Nyhan says.

The GOP was generally successful in defeating the more radical tea-party candidates in the primaries, he says. “Certainly there was an effort to tone down the rhetoric and defeat the most extreme candidates in Republican primaries, but whether that translates into policy moderation is a different question. I’m dubious.”

Wheelan, author of The Centrist Manifesto and a campaigner for a new centrist party in American politics, had a stake in Tuesday’s results. “I was personally disappointed by the outcomes for two impressive independent U.S. Senate candidates, Larry Pressler in South Dakota and Greg Orman in Kansas.”

After working actively on behalf of both independents, Wheelan was not discouraged. “Lesson No. 1 from those races: Credible independent candidates can get traction in statewide races.”

And he had some advice for the new majority party. “If I were the Republicans, I would send two kinds of bills to Obama: Bills that he can sign—tax reform or other issues. And bills they know he will veto. Strategically this would set them up to highlight differences and show that they can get things done as they head into 2016.”

Fowler says Tuesday’s results, while strong for the GOP, did not indicate a Republican wave.

“The reason the Senate had so many seats in play is that Barack Obama had coattails, and big coattails, in 2008 in states like North Carolina, Colorado, Alaska, and so forth,” she says. “It was inevitable that they were going to be vulnerable this year.”

Then there is New Hampshire, where Democratic incumbent Sen. Jeanne Shaheen repelled a challenge by Scott Brown, the Massachusetts Republican who filled Sen. Ted Kennedy’s seat in 2010, and moved to New Hampshire to carry the standard for the GOP.

“Ah, New Hampshire. New Hampshire as an independent, ornery state appeared once again.” Fowler says. “That was all about grassroots operations.” The state known for retail politics apparently didn’t buy into a national Republican strategy.

In other election news, researchers from Dartmouth and the University of Florida were tracking how long it took voters—in Hanover, N.H., and in several precincts in Florida’s Miami-Dade County—to cast their ballots. Michael Herron, a professor of government at Dartmouth, was one of the lead researchers in the study.

Do you know of other alumni who were victorious at the polls on Tuesday night? Please email Dartmouth Now, and let us know.