Chemists Gather to Talk About Arsenic

Arsenic was on the agenda at the inaugural meeting of the New Hampshire Area of the Northeastern Section of the American Chemical Society (NESACS), on Oct. 22 at Dartmouth’s Steele Hall.

More than just chemists talking chemistry to other chemists, an audience of nearly 100 faculty, students, researchers, and members of the community heard speakers talk about a matter of serious public concern—human exposure to arsenic in food and drink. 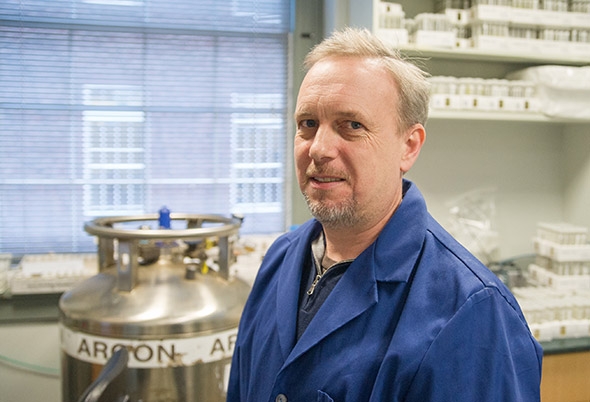 Brian Jackson is the director of the Trace Metal Analysis Core Facility at Dartmouth and a research associate professor of earth sciences. (Photo by Eli Burakian ’00)

Hosted by Dartmouth’s Department of Chemistry and Department of Earth Sciences, as well as the Green Mountain Section of the American Chemical Society, the meeting featured headliners in the field of dietary arsenic: Seth Frisbie, an associate professor of chemistry at Norwich University, and Brian Jackson, a research associate professor of earth sciences and director of the Trace Metal Analysis Core Facility at Dartmouth.

Frisbie led off with a presentation titled “Discovering the Largest Mass Poisoning in History: Arsenic, Manganese, Uranium, and Other Toxic Metals in the Drinking Water of India, Bangladesh, Myanmar, and Ultimately the World.” Since 1997, he has been working on drinking water and public health in developing countries.

Before the advent of well-drilling technology in the mid-19th century, most drinking water came from standing water, such as ponds and rivers, or shallow wells. Frisbie spoke of the inherent dangers in this water—the presence of disease-carrying microbes, such as those responsible for cholera.

“Surface and dug well water often has microorganisms that can make a person sick. Since the symptoms may appear just hours or days after drinking, rapid diagnosis and treatment is possible,” he said. While deep-well water is relatively free of microbial disease, it can carry toxic metals, such as arsenic, that have leached out of the surrounding rock.

“The diagnosis of chronic metal poisoning is made difficult by the five to 20 or more years of exposure needed to produce symptoms,” Frisbie said. “Approximately 75 million Bangladeshis are at risk of death from skin, bladder, liver, and lung cancers caused by chronic arsenic poisoning.” 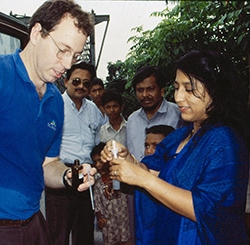 While those already stricken may have little hope, Frisbie and his colleagues have seized upon a solution that could benefit future generations. “Eight-five percent of Bangladesh’s neighborhoods have at least one well that does not require treatment for arsenic removal prior to drinking,” he said. “Wells found to be safe are marked with green paint and those unsafe are painted red.”

Brian Jackson followed Frisbie on the podium and talked about the extensive Dartmouth research on arsenic. He cited the presence of arsenic in New Hampshire’s drinking water, noting that arsenic, as in Bangladesh, is also geologically derived in this area and extends into Maine, as well.

Jackson talked about studies initiated in 2009 that focused on a cohort of pregnant New Hampshire women who obtained their household water from private wells in areas where some of the water supplies have been found to be above the safe drinking water limit for arsenic.

With the study ongoing, researchers have shifted gears to also look at arsenic in food, “a source that can be equal to or greater than arsenic exposure from drinking water. While regulations exist for water, there are none currently for arsenic in food,” said Jackson.

“Arsenic exposure during pregnancy is a public health concern due to potential health risks to the fetus,” says Margaret Karagas, director of the Children’s Environmental Health and Disease Prevention Research Center at Dartmouth. Her team looked at rice consumption by women in the cohort of pregnant women. Rice is known to be high in arsenic, due to the grain’s ability to extract arsenic from the environment.

Arsenic in the urine of these women was a measure of arsenic exposure, and levels increased with increases in rice consumption. The research center recently received an $8 million grant to continue its work, jointly funded by the EPA and National Institute for Environmental Health Sciences (NIEHS).

Jackson talked about another Dartmouth group researching the impact of arsenic, the Toxic Metals Superfund Research Program, funded by the NIEHS. The program, which has been studying the sources and effects of arsenic and mercury, was awarded a $13 million grant by the NIEHS in 2014 to continue this work.

He discussed a 2011 Dr. Oz Show episode that dealt with arsenic in apple juice. “Though Dr. Oz was roundly criticized, his pronouncement had an effect,” said Jackson. “Two years later, the FDA proposed a regulatory guideline for apple juice which will probably be accepted, but only apple juice. We detected comparable levels of arsenic in some grape juices, and baby fruit purees products, and the FDA has found high levels in some beers, but only apple juice is being covered by this reg.”

He wound up with considerations of arsenic-containing pesticides historically used in agriculture, and the presence of arsenic in fish and poultry. “The compound in fish you eat is excreted in three days with no toxicity,” said Jackson.

Poultry had been fed arsenic compounds as antibiotics since 1940s to improve growth and prevent disease. “Three of four feed additives are now banned by the FDA, but one arsenic feed additive is still used in turkey production,” he said.

He cautioned that any arsenic in poultry concentrates in the liver. Jackson eats chicken and turkey, he said, but isn’t a fan of liver pâté.

There are still no regulations for food, Jackson said, but he encouraged his listeners to practice moderation if they consume a lot of rice.