Dartmouth SYNERGY has received a $3.2 million National Institutes of Health (NIH) grant that will help speed research and clinical trials of promising treatments at academic medical centers across the nation. Assuming success in this initial phase, an additional $1.6 million will be added to extend the impact of this project to include nearly twice as many participating centers. 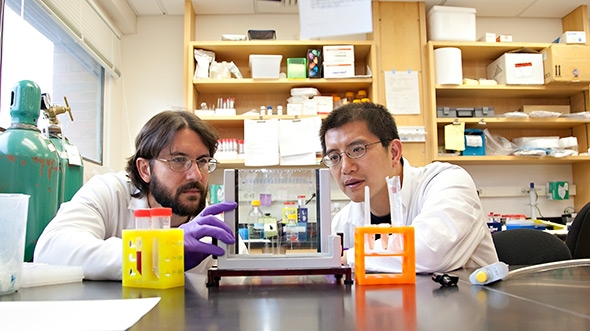 Dartmouth SYNERGY is a collaborative effort involving scholars, researchers, and clinicians in Dartmouth’s Faculty of Arts & Sciences and its professional schools. (Photo by Joseph Mehling ’69)

“This new grant will support better coordination, efficiency, and oversight of research involving multicenter studies,“ says Alan Green, principal investigator of the grant, director of Dartmouth SYNERGY, and chair of the Department of Psychiatry. “This innovative approach will ensure that the latest research developments can quickly inform treatment and improve the health of patients.”

Translation is the process of turning laboratory and clinical discoveries into interventions that improve the health of individuals and the public. However, clinical trials of new treatments, which often take place at many academic centers simultaneously, may be delayed because of inefficiencies and redundancies in the ethical and regulatory processes governed by separate Institutional Review Boards (IRB). Dartmouth’s new grant proposes to accelerate the IRB process by establishing multicenter agreements to facilitate the initiation and completion of important new clinical research projects.

Dartmouth SYNERGY is a collaborative effort involving scholars, researchers, and clinicians in Dartmouth’s Faculty of Arts & Sciences and its professional schools, including the Geisel School of Medicine, which includes The Dartmouth Institute for Health Policy & Clinical Practice; the Tuck School of Business; and Thayer School of Engineering, as well as the Dartmouth-Hitchcock health system and the White River Junction Veterans Affairs Medical Center and their affiliates throughout Northern New England.

”People want to know that publicly funded research produces tangible benefits,“ Green says. ”This new grant will speed that process and help translational scientists at SYNERGY and other institutions to change the landscape for biomedical research so that research findings can be quickly leveraged into new treatments."

Beginning in mid-2015, SYNERGY will be housed in Geisel’s new Williamson Translational Research Building, currently under construction on the Dartmouth-Hitchcock campus in Lebanon, N.H.