How often do you get to meet one of your heroes? This past Veteran’s Day, ROTC cadet and government major Jonathan Griffith ’15, had an opportunity to talk with one of his—former Secretary of State Colin Powell.

Powell was at Norwich University, a senior military college in Northfield, Vt., as part of the university’s Todd Lecture Series. Dartmouth’s small but growing on-campus Army ROTC program is affiliated with Norwich, so the Dartmouth cadets were invited to attend Powell’s speech, held in Norwich’s Shapiro Fieldhouse. 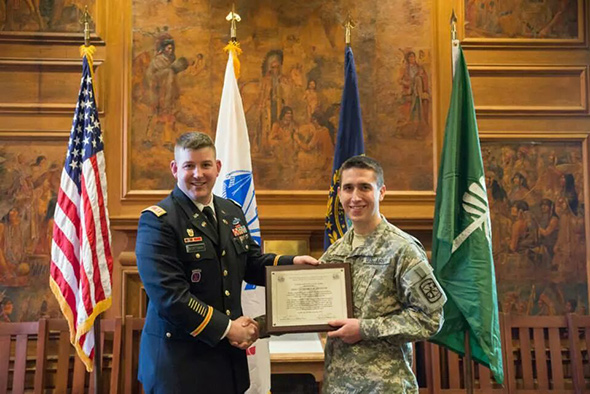 ROTC cadet Jonathan Griffith ’15, at right, with Capt. Gregory Wortman, during his contracting ceremony. More recently, Griffith got to meet one of his heroes, former Secretary of State Colin Powell. (Photo by Eli Burakian ’00)

By coincidence, Griffith had just been telling the Dartmouth ROTC unit about Powell’s recent book, It Worked for Me: In Life and Leadership (Harper 2012). The book had been recommended to him by a commander in the Vermont National Guard unit in White River Junction, Vt., where Griffith trains one weekend a month in addition to his Dartmouth ROTC commitment.

“I hadn’t known General Powell was going to be speaking at Norwich, so I was really excited when I found out,” Griffith says.

Then the cadets’ leader, Army Capt. Gregory Wortman, told Griffith he had been selected, along with nine Norwich cadets, to join the retired general for a face-to-face conversation.

“As soon as you find out that you’re going to sit down with somebody that big, it kind of takes your breath away,” says Griffith. “I didn’t want to ask the obvious questions.”

But Powell soon put the group at ease. “He has this way of talking like you’ve known each other for a long time. I realized he is a normal guy,” Griffith says.

After a few stories about his career, Powell opened the floor to the cadets. Griffith was able to ask the final question. “I asked if his leadership style had changed as he started transitioning into more of a civilian role,” Griffith says.

According to Griffith, Powell answered thoughtfully. “He said his leadership style hadn’t really changed, but expanded.” The retired general advised the cadets to “stick to who you are” while continuing to develop a leadership style that could grow with every new experience.

“That’s kind of what I had thought,” says Griffith, who aspires to a career in business and politics. “But to hear somebody who was actually successful answer that question was really cool.”

At the public speech, Powell discussed a range of subjects, from personal stories to current national issues. “It almost sounded like a political campaign speech,” Griffith says.

During the Q&A session, a member of the audience asked Powell to comment on the intelligence reports that led up to the 2003 invasion of Iraq.

“He asked if we were lied to. The room went silent,” Griffith recalls. But he was impressed with Powell’s answer. “He said that he had strongly advocated for a diplomatic approach, but that when your commander in chief tells you to do something, you have to do it. Based on the intelligence they had at the time, they made the decision that seemed best.”

Griffith says Powell’s answer gave him insight into the human element of governing. “They’re regular people, and people make mistakes. And so I think he answered it well.”

If Powell were to run for national office, he can count on at least one vote. “He is one of the few candidates who truly has a bipartisan nature,” says Griffith. “I would absolutely vote for Colin Powell.”