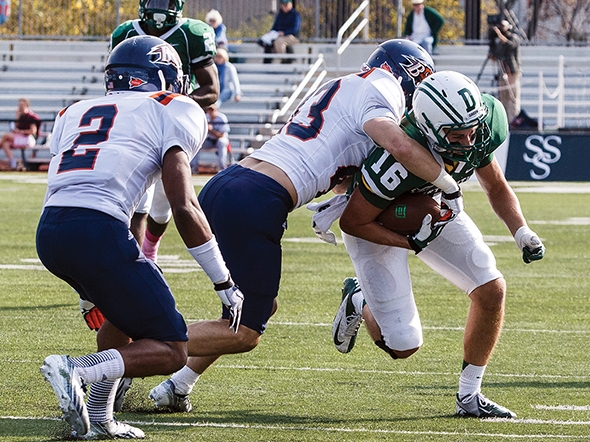 Bo Patterson ’15 plays both football and baseball for the Big Green. (Photo by Mark Washburn)

Bo Patterson ’15, from James Island, S.C., is a history major and one of only a few two-sport athletes at Dartmouth, playing center field for the varsity baseball team and wide receiver for Big Green football.

Patterson spoke with “From the GREEN” about his Dartmouth experience, and the challenges and rewards of life as a Dartmouth student-athlete twice over.

Like most kids who play sports, I grew up dreaming about playing either football or baseball at a big-time school in front of thousands of fans. But when I started looking at colleges in high school, I realized I also wanted to go to the best school I possibly could. When I came to Dartmouth for my official visit, it felt like home as soon as I stepped off the bus. I loved the campus, I liked the coaches, and I didn’t have to give up either sport. My decision was easy.

When I arrived on campus as a freshman, [baseball] Coach Whalen and [football] Coach Teevens got together and said, “We’re not going to overwhelm this kid.” And so the sport seasons are pretty much split right down the middle: In the summer and fall I’m a football player, and in the spring and winter I’m a baseball player—I’m really just like any one-sport athlete most of the year. There’s not much overlap.

I get asked which sport I like more. I don’t think I could pick one, and I’m glad I don’t have to. They are very different. I like to compare baseball to golf: It looks like a simple game, but it’s extremely frustrating. Even the best in the world fail more than they succeed. And football is not like that at all. You don’t have bad days in football, per se. You can always make something happen. It’s good to shift as the year goes on, from one sport to the other and one mindset to another. 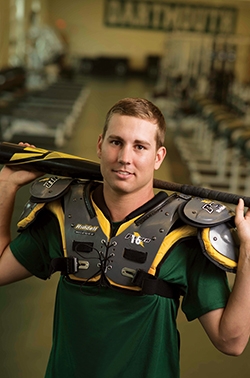 “Like most kids who play sports, I grew up dreaming about playing either football or baseball at a big-time school in front of thousands of fans,” says Bo Patterson ’15. (Photo by John Sherman)

Sports at Dartmouth have opened many doors for me. I come from a small town on an island off Charleston, S.C. I had never left the Carolinas before I came here—I had never even been on a plane. But with the football and baseball teams, I’ve been all over the country and even outside the United States. I’ve had experiences I never could have imagined and met people I never would have had the chance to encounter. It has really opened up the world to me.

Being a student-athlete here also has thrust me into situations that have helped my people skills evolve drastically. I was an extremely shy guy coming in, and I struggled to talk to people. Now, whether it’s meeting with professors, speaking in class, getting to know teammates, or even doing interviews, I don’t feel uncomfortable going up to people, introducing myself, and starting a conversation. It’s something that my parents and friends back home have noticed and talk about when they see me. That confidence is a powerful feeling.

The one regret I have about playing two sports is that I’ll never be a captain in either one. I’m not around for off-season workouts in either sport. But I’ve learned I don’t have to have the captain title for my teammates to look up to me—I can still be a leader, and guys can still respect me. I hang out with the football guys during baseball season and vice versa, and I hope the younger guys see me working hard, even when I’m doing the other sport. Titles aren’t everything.

I don’t know what the future holds for me. I’m going to play both sports for as long as I possibly can, whether that’s in the U.S. or maybe in Canada. Sports really shaped me into the person I am today, so I’m going to play until I just can’t anymore. The career can wait.