At a recent meeting, the Fed panel debating the Federal Reserve Bank’s decision to end quantitative easing—the monetary policy of buying up treasury bonds and mortgage-backed securities in order to stimulate the economy—expressed concerns about the $4 trillion the practice added to the central bank’s balance sheet, and considered gross domestic product numbers released that morning, before resolving to keep the Fed funds rate at the historic low of 0 to 0.25 percent. 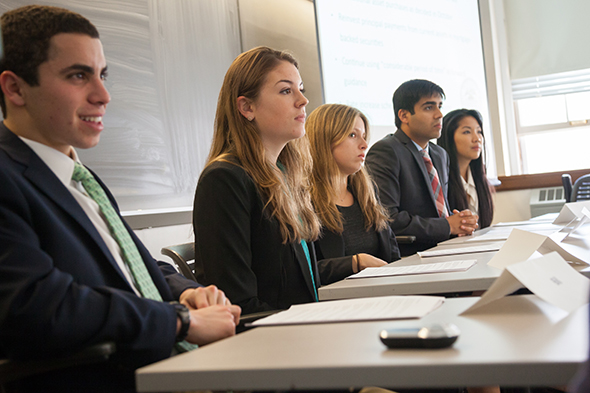 The discussion did not involve Fed chair Janet Yellen and the other Federal Reserve governors in Washington, D.C., however. The panel was made up of undergraduates Ashneil Jain ’15, Sarah Morse ’15, William Lane ’15, Grace Ma ’15, and Janine Jablonski ’15, Dartmouth’s College Fed Challenge team.

Led by Elisabeth Curtis, a senior lecturer in economics, and Frank Zarnowski, a visiting professor in economics, the team will compete Friday, Nov. 7, in the regional Fed Challenge, hosted by the Boston Fed. The Northeast regional competition includes up to 20 teams from schools like Harvard, Yale, Brown, and MIT, and is by far the toughest, says Zarnowski, a veteran of the challenge who helped organize the event more than 15 years ago, when he was a professor at Mount St. Mary’s College in Maryland.

The winner of the regional competition goes on to the national challenge at the Federal Reserve Board of Governors in Washington, D.C., where members of the board will participate as judges. In the past two years, Dartmouth’s team has finished second in the regional finals—behind Bentley University in 2012 and just points short of national champion Harvard last year. 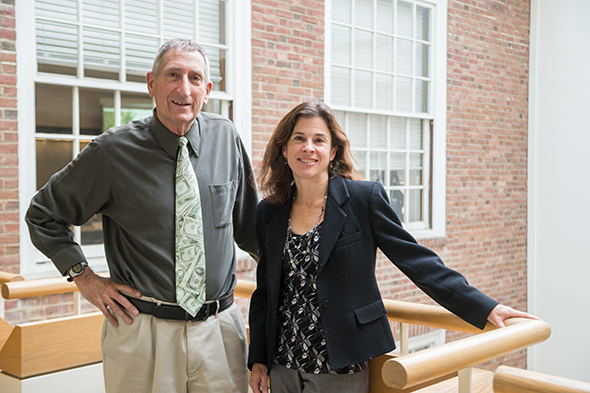 Curtis teaches the economics department’s Federal Reserve monetary policy class that makes up the Dartmouth Fed Challenge team. Students who have completed an “Economics 22” macroeconomics class can apply to be part of the Fed Challenge team by submitting a letter of interest and a resume. All the team members have also interned over the preceding summer at major banking or financial institutions.

“Everyone is assigned research in an economic indicator over the summer, and meanwhile, I move very fast to get them up to speed on the language of monetary policy and banking,” Curtis says. “Since we start school a bit later than most other schools we compete against, the class just gets right to work preparing for competition.”

Curtis invited President Phil Hanlon ’77 and Doug Staiger, the John French Professor in Economics and past economics department chair, to join Zarnowski and her in grilling the team after a practice session.

Staiger questioned the members on unemployment numbers and how these relate to the level of slack in the economy. This prompted a lively discussion of U-3 versus U-6 unemployment numbers—or how the official unemployment rate relates to the total number of unemployed, underemployed, and people who have stopped looking for work.

President Hanlon commended the students for their grasp of monetary policy and economics.

“What was clear to me, beyond these students’ command of highly complex financial concepts, was their understanding of the real world impact,” says Hanlon. “This is where their academic work in the classroom and their experiences in the industry, interning in high-profile financial institutions, comes together.” 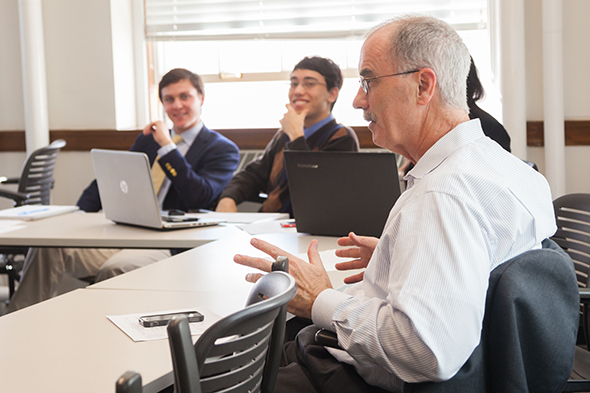 President Phil Hanlon ’77 recently attended a team practice session. “What was clear to me, beyond these students’ command of highly complex financial concepts, was their understanding of the real world impact,” he says. (Photo by Corinne Arndt Girouard)

Curtis says she invited Hanlon and Staiger to give the team members a sense of the kind of scrutiny they will face at the Boston competition on Friday. Zarnowski timed the practice session, and let the students know that they finished their presentation 22 seconds under the maximum time of 15 minutes.

Jain and Jablonski both say they believe Dartmouth students are well equipped to communicate their ideas in a high-pressure environment, such as being judged by Fed governors.

“It is the Dartmouth advantage. I’ve seen kids who are ‘scary smart’ but couldn’t handle public speaking,” says Jablonski.

“It’s in the way faculty engage with students,” Jain says. “It’s the eight-to-one student-teacher ratio, discussion-based classes, and the social aspect of a Dartmouth education.”

The team impressed Hanlon. “They have a tremendous grasp of the role the Fed plays in our nation’s businesses, communities, and families,” he says. “They’re going to represent Dartmouth well, and I think contest officials will find their ideas really compelling.”