Read the full story by Anna Fiorentino, published by Thayer School of Engineering. 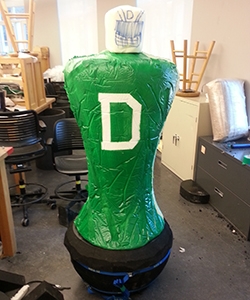 With assistance from their project manager, Research Engineer John Currier, the students and Teevens obtained a provisional patent last December for their automated tackling dummy, called the Mobile Tackling Target, to replace the static pop-up ones now used by players. The team hopes to hold an official patent within the year for the device, which last spring also landed them in the top three for the most inventive undergraduate student invention at the Lemelson-MIT National Collegiate Student Prize competition.

The Mobile Tackling Target will be the only powered tackling device to simulate a real football player in size, weight, and agility by replicating an in-game tackling experience.

“We created it to eliminate player-on-player contact during tackling drills, while maintaining the level of challenge associated with a real live person,” says Kastner.