Four student projects earned funding, design, and development support from the Digital Arts Leadership and Innovation (DALI) Lab and DEN Innovation Center based on the persuasiveness of their two-minute pitches. 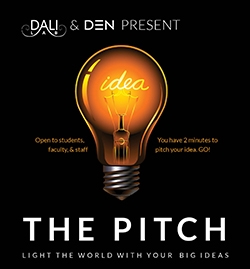 Members of the Dartmouth community involved in 21 start-up concepts made the case for their ideas at The Pitch, sponsored by the DALI Lab and the DEN, before a live audience and a panel of judges in Lowe Auditorium on Nov. 4.

Each team had just 120 seconds to tell about its idea and explain why it was important and who would benefit. Jamie Coughlin, director of New Venture Incubator Programs and the DEN Innovation Center, and Lorie Loeb, co-founder and executive director of DALI, say the judges were particularly interested in supporting projects that would benefit society and the natural world, or offer a new way of understanding data and other information.

The panel selected three winners and the fourth was selected by the audience.

“The pitches that rose to the top were not only great ideas, but were thoughtful, well articulated, and made the best use of two minutes to raise awareness of their venture,” says Coughlin. “The bar has been raised in terms of the expectations of pitching a new idea.”

Loeb also praised the quality of all the presentations. “It was very hard to choose the winners, but in the end, the pitches that stood out were creative and novel, had large potential impact, and had a team who seemed capable of finishing the project. I encourage those who didn’t win to keep refining their ideas, reach out to the judges for feedback, and consider resubmitting in the winter term.”

The Pitch winners are:

DALI is supported by the Neukom Institute and Dartmouth’s computer science department.
Written by
Bill Platt
Share this
FacebookTwitterEmail
Articles