“The IvyQ Conference brought together a critical mass of LGBTQIA+ students from Dartmouth and peer institutions for the explicit purpose of critically engaging with LGBTQIA+ knowledge and praxis,” says Reese Kelly, director of the Center for Gender and Student Engagement (CGSE), which provided an administrative home for the conference. Kelly is also interim director of the Office of Pluralism and Leadership. (LGBTQIA+ stands for lesbian, gay/genderqueer, bisexual, transgender, questioning/queer, intersex, and ally/asexual.) 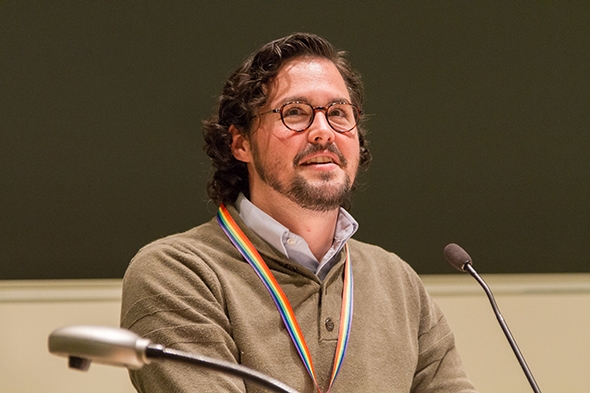 Reese Kelly, director of the Center for Gender and Student Engagement and interim director of the Office of Pluralism and Leadership, gives the opening address at IvyQ 2014, held at Dartmouth Nov. 6-9. (Photo by Eli Burakian ’00)

The annual conference, which has previously been held at the University of Pennsylvania, Columbia, Brown, Yale, and Princeton, offers a mix of workshops, forums, speeches, and events with educational, social, and networking goals. It was planned and organized by a team of Dartmouth students, who handled everything from funding to logistics to hospitality. Attendees included students from the University of Oxford, RPI, Virginia Polytechnic Institute, Middlebury, Stanford, and Duke in addition to the Ivies.

“As the CGSE, we are honored to have had the opportunity to support this endeavor, to engage student leaders in the process of conference organizing and community development, and to encourage critical reflection around topics of gender and sexuality,” says Kelly.

Michelle Hector, CGSE associate director, says, “Towards the end of the conference I overheard two Dartmouth students discussing how different the campus felt. They said something that students constantly reiterated throughout the conference: having so many LGBTQIA+ students on campus felt good. That made me so happy and proud of our students.”

IvyQ student chair Kelsey Weimer ’16 has received positive feedback about the conference from attendees and from “both institutional and student LGBTQIA leaders.” Dartmouth’s campus “really opened up and welcomed attendees,” she says, including 121 Dartmouth students who hosted guests. And, she says, “ideologically, the conference is progressing well, and is built to be up to speed with important social movements within the queer community.”

“We spent over six months planning this conference, and while there were struggles along the way, the planning committee went above and beyond to make the conference a success. We had amazing keynotes, informative workshops, and fun social events,” says team member Yeja Dunn ’16.

The Rev. Nancy Vogele ’85, director of Religious and Spiritual Life at the Tucker Foundation, was one of several Dartmouth community members on the conference program. Hosting the IvyQ conference this year was important for three reasons, she says.

“First, it allowed our LGBTQIA students to create and be a part of a larger LGBTQIA community. Dartmouth students loved meeting their peers from other institutions,” Vogele says. Also, she says,  “a great deal of intellectual learning, debate, and networking happened. One student from Princeton took part in my workshop to get ideas for his senior thesis. Over 30 students attended a workshop given by Ethan Falleur ’16 on “What the Bible Says about Homosexuality” in order to learn in more detail from where and why opposition continues.” And finally, says Vogele, “hosting the IvyQ allowed the entire campus to think about issues of sexuality, justice, inclusion, and acceptance.”

“I think Dartmouth can benefit in a lot of ways from IvyQ,” says the conference’s finance chair. “It expands the minds of Dartmouth students to see the diversity of people out there and to learn to be less scared of them. It also helps Dartmouth as an institution by showing the visiting students and, by extension, the rest of the collegiate community that Dartmouth simply is not the scary, wild place that so many make it out to be. By ensuring this conference was funded, I hope we’ve made a difference in the lives of the attendees. IvyQ is a really unique opportunity for people to find lots of others with similar experiences and see the resources available to them.”