This story was originally published by the Geisel School of Medicine.

When Mike Lauria ’05, Geisel ’18, was a Dartmouth undergraduate studying biochemistry, he didn’t aspire to join an elite military group, nor did he have dreams of becoming a physician. He wasn’t sure what he wanted to do. 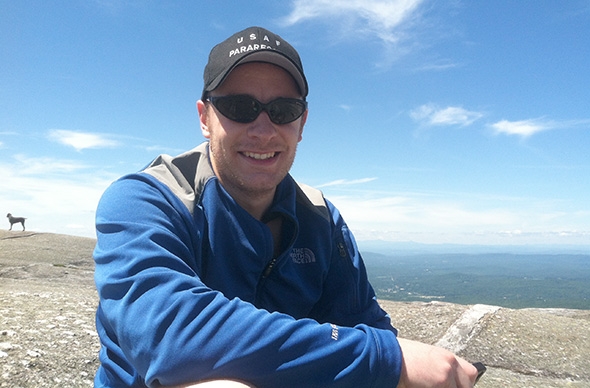 After Commencement, Mike Lauria ’05, Geisel ’18, went off to basic training and into the “pararescue pipeline,” or “Superman School,” as it is informally known. (Photo courtesy of the Geisel School of Medicine)

Although Lauria spent his college years as an emergency services volunteer with the Hanover Fire Department and provided medical support to officers in one of the region’s law enforcement agencies, a medical career wasn’t on his radar.

Then his training officer, a former Green Beret and state police officer, asked Lauria what he planned to do with himself after graduation. “I said I wasn’t sure, and he replied, ‘If you really like pre-hospital emergency care and rescue, and you like the tactical side of law enforcement, you should check out the Air Force’s pararescue program,’” Lauria recalls.

His suggestion surprised Lauria, who had never expressed an interest in joining the military. He had nothing against it, but he had no particular interest in it, either. The officer went on to say that he had attended dive school with the “pararescue guys” and encouraged Lauria to consider the program.

He did, and with Commencement looming, Lauria strode into the Air Force recruiters’ office in West Lebanon, N.H., and told them he was there to enlist. “They thought I was crazy,” Lauria says. “They asked me if I was sure I wanted to enlist. If I was sure I wouldn’t rather become a pilot or something else because I was soon to be a college graduate.” Sure of his decision, he enlisted.

On the heels of commencement, Lauria was off to basic training and into the “pararescue pipeline,” or “Superman School” as it is informally known. Pararescuemen are special operations military paramedics who parachute, scuba dive, rock climb, or do whatever it takes to save lives in hostile territory and in humanitarian aid environments. They are able to assess critical situations quickly and manage trauma in the field, often with limited resources in the face of danger and time constraints. 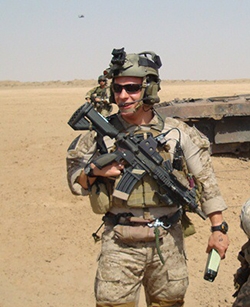 “When help is not accessible through any other means, pararescue go where others can’t go and do what others can’t do,” says Mike Lauria ’05, Geisel ’18. (Photo courtesy of the Geisel School of Medicine)

Lauria says it was one of the longest special operations training courses in the world, and an intense and demanding experience. “It was the worst and the best time of my life,” he adds. “I was miserable—but the amazing thing is that when you are pushed to your physical and psychological breaking point you learn a lot about yourself. You realize that you are capable of much more.”

After completing the grueling two-year training, Lauria was assigned to a unit based in England, where he entered an endless cycle of deployments interspersed with ongoing training back in the U.S.

“One of the deployments was augmenting a joint special operations task force. We provided direct medical support to the operation, which means you either go out with an assault team or you stand by in case their helicopter gets shot down or their convoy gets ambushed,” Lauria says. “A helicopter carrying 12 men crashed during a sandstorm. Many were critically injured and one man was pinned under the copter. We had to orchestrate a complicated extrication in a challenging environment. In the middle of the Iraqi desert, decisions must be made very quickly.”

For Lauria, it’s gratifying to work with people who are seriously or critically ill and need help. “When help is not accessible through any other means, pararescue go where others can’t go and do what others can’t do,” he says. “You go out there and you save those people.”

After leaving the military, Lauria returned to New Hampshire in 2012 to work with the Dartmouth-Hitchcock Advance Response Team (DHART) as a flight paramedic, providing acute care to critically injured and seriously ill patients from Northern New England en route to Dartmouth-Hitchcock Medical Center (DHMC). Working side-by-side with DHMC physicians gave Lauria a glimpse of taking care of patients over time rather than in the moment. That level of care appealed to him, and he decided to apply to Geisel School of Medicine.

While working with DHART, the easy-going and thoughtful Lauria was asked to share his military medical experiences with local EMS organizations. His initial talk grew into presentations at national conferences for critical care professionals, a Dartmouth lecture titled “Military Special Operations Medicine,” and two presentations at DHMC this year—Nursing Grand Rounds, “Medicina Bona, Locis Malis: The Evolution of Special Operations,” and Department of Surgery Grand Rounds, “Making the Call: Enhancing Cognition, Critical Thinking, and Decision Making in Acute Care.” As a guest lecturer at Geisel School of Medicine, he gave a talk titled “Austere Critical Care.”

“I realized what I learned in the military went beyond medicine,” Lauria says. “You may be a very knowledgeable and capable physician, but when someone is dying in front of you, being able to apply those skills in a very stressful situation is a different story. Most people don’t realize the advanced level of care and ingenuity that happens in the field or in a tent—to project that into a hospital environment is incredible.”

His Surgery Grand Rounds presentation on critical decision-making was filmed and posted on YouTube by Lauria. Within 48 hours the presentation had more than 500 hits, and by the time Lauria matriculated this fall, he was receiving requests for podcasts from the Royal Flying Doctor Service in Australia, surgeons in New York City, and many others.

“I wouldn’t be here without the support of the people at DHART,” Lauria says. “The level of knowledge and insight that group of nurses and paramedics have has pushed me beyond what I learned in the military.”

And the encouragement he received as an undergraduate has come full circle. “I’m so proud of the support shown for veterans by the Dartmouth College Board of Trustees and President Emeritus James Wright,” he says. “It’s such a great feeling knowing that you are welcome here—it’s like coming home.”