The Rhodes Scholarship, the oldest and best-known award for international study, is widely considered to be the most prestigious postgraduate academic award available to college graduates. 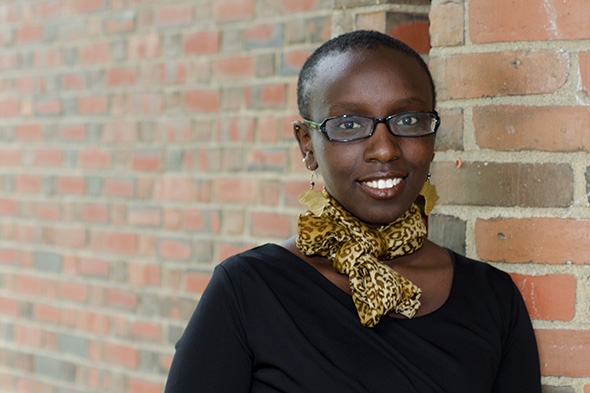 Established in 1903 through the will of British philanthropist Cecil Rhodes, the scholarship pays all expenses for a graduate program at the University of Oxford in England. A class of 83 scholars is selected each year from Australia, Bermuda, Canada, Germany, Hong Kong, India, Jamaica and the Commonwealth Caribbean, Kenya, New Zealand, Pakistan, Southern Africa (including South Africa, Botswana, Lesotho, Malawi, Namibia, and Swaziland), the United States, Zambia, and Zimbabwe.

“We are all so proud of Miriam’s many accomplishments and thrilled that the Rhodes Trust has recognized her tremendous potential,” says President Phil Hanlon ’77. “This is an honor that reflects on the entire Dartmouth community.”

An anthropology major, Kilimo plans to use the scholarship to pursue a master’s in women’s studies at Oxford.

“I am very excited and thankful to God, my professors, my dean, family, and friends,” Kilimo says. “The honor makes me all the more grateful for the mentors I met during my time at Dartmouth, who always encouraged and believed in me. I am especially grateful about how the confluence of my experiences as a Senior Fellow and as a Rockefeller Leadership Fellow implicitly prepared me for the Rhodes interview—I felt very confident about articulating my interests to the interview panel.”

“At Dartmouth, Miriam made incredible use of opportunities to engage in intensive scholarship,” says Provost Carolyn Dever. “I am overjoyed that her talents and hard work are being rewarded, and so pleased that Dartmouth can count another Rhodes Scholar among its alumni.”

As a Senior Fellow, Kilimo conducted research on “Inter-Ethnic Friendship Among Youth in Urban Kenya,” with her adviser, Sergei Kan, a professor of anthropology and Native American studies. A salutatorian of her class, she was inducted into Phi Beta Kappa, and was a James O. Freedman Presidential Scholar, a Rufus Choate Scholar, and a recipient of the W.E.B. DuBois Award for Academic Excellence for all four years of her Dartmouth career. She received a Robert G. McGuire III 1958 Memorial Fund grant for academic research on ethnicity and nationalism in Kenya, and a William Jewett Tucker Foundation Fellowship grant for a project to combat the practice of female circumcision through education in Kenya. Kilimo was a member of the Dartmouth African Students Association, the Christian Union, and the Jabulani African Chorus; worked as an undergraduate adviser and as a student consultant with the Office of the Dean of the College; and wrote for the student creative nonfiction journal 40 Towns.

“We are gratified to see Miriam recognized internationally for the same qualities that have impressed so many of her peers and mentors at Dartmouth,” says Jessica Smolin, assistant dean for scholarship advising. “She was an exceptional student here with an outstanding record of independent research. She will be a wonderful ambassador for the College at Oxford.”

“Rhodes Scholars are chosen not only for their outstanding scholarly achievements, but for their character, commitment to others and to the common good, and for their potential for leadership,” says Elliot F. Gerson, the American secretary of the Rhodes Trust, on the Rhodes Scholarship website.

For more information about applying for Rhodes and other programs, see Dartmouth’s National Scholarships/Fellowships website.