Author and Iraq War veteran Phil Klay ’05 has won the National Book Award for his first collection of short stories, Redeployment (Penguin 2014). He joins the ranks of distinguished alumni of letters who have also won the award, such as Louise Erdrich ’76, Annette Gordon-Reed ’81, and David Brion Davis ’50. 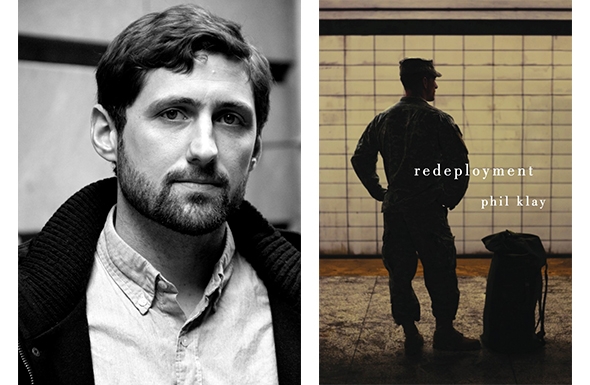 Described by New Yorker critic George Packer as “the best literary work thus far written by a veteran of America’s recent wars,” the stories in Redeployment reflect how war can indelibly infiltrate the psyches of soldiers and the people to whom they return, post-combat.

Klay (which rhymes with “eye”) majored in English and creative writing at Dartmouth, where his adviser was the poet Tom Sleigh (now at Hunter College). After graduation, Klay joined the Marines and served as a public affairs officer in Iraq’s Anbar Province from 2007 to 2008.

In an email to Dartmouth Now, Klay said, “I’m still in a bit of shock, but so grateful that they believe in the book, and in the conversation going forward about the experience of our modern wars.”

In what The New York Times calls “an emotional acceptance speech” on Wednesday night, Klay said he came back from the experience of war “not knowing what to think. What do you do when you’re trying to explain in words, to the father of a fallen Marine, exactly what that Marine meant to you?”

Some Past NomineesAnd Winners From Dartmouth

Thanking his readers, he said, “I can’t think of a more important conversation to be having—war’s too strange to be processed alone.”

He captures that strangeness of war in the title story of his collection, which opens with a matter-of-fact but gruesome image of a dog “lapping up blood the same way he’d lap up water from a bowl.” The story examines what it means to think—and not think—about the work of killing.

Returning to the U.S. after his discharge from the military, Klay earned an MFA from Hunter College and began publishing stories and essays in The New York Times, The Washington Post, The Wall Street Journal, Newsweek, and Tin House, among other publications. The title story of Redeployment originally appeared in Granta and was anthologized in Fire and Forget: Short Stories from the Long War (Da Capo Press 2013).

Klay has remained deeply connected to Dartmouth. In October he gave a reading in Sanborn Library as part of the English department’s Poetry and Prose Series, and joined a conversation on “America and Iraq: Past, Present and Future” with William Wohlforth, the Daniel Webster Professor of Government, and Steven Simon, visiting professor of government, as part of the War and Peace Studies Program at the John Sloan Dickey Center for International Understanding.

The National Book Award started in 1950 and is among the most prestigious American literary prizes. Describing the experience of winning the award, Klay said, ”My inbox has been a bit crazy.“