“The letter came out of the blue,” says Colin Calloway, the John Kimball Jr. 1943 Professor of History and a professor of Native American Studies. It was from the dean of the Faculty of Humanities and Social Sciences at the University of Lucerne, inviting Calloway to Switzerland to receive an honorary doctorate. 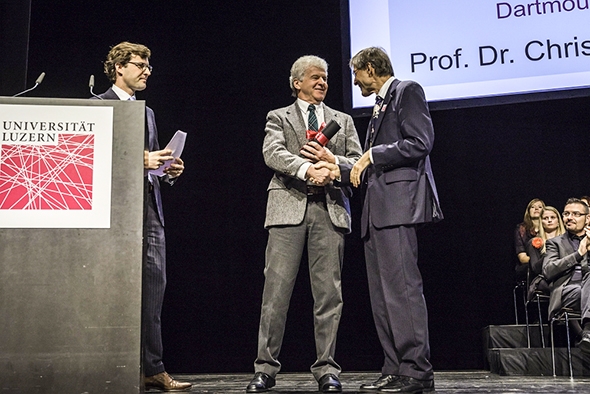 Professor Colin Calloway, center, receives an honorary doctorate from Christoph A. Schaltegger, dean of the faculty of Cultural and Social Sciences, left, and Paul Richi, rector, both of the University of Lucerne. (Photo courtesy of Colin Calloway)

The University of Lucerne is a relatively new institution, Calloway discovered—although its roots go back to the 17th century, it was established as a public Swiss University, with faculties of theology, law, and humanities and social sciences, in 2000.

Though Calloway hadn’t heard of the university, its faculty had heard of him—and unanimously voted to award him the honorary doctor of philosophy degree.

“They knew my work and had read my books,” says Calloway, who was born in Yorkshire, England. “It’s gratifying that there’s a sincere interest in Native American studies in Europe. I feel deeply honored.”

Calloway, who earned his PhD from the University of Leeds in England in 1978, is the author and editor of numerous books, including, most recently, The Victory With No Name: The Native American Defeat of the First American Army (Oxford University Press 2014) and The Indian History of an American Institution: Native Americans at Dartmouth (UPNE 2010). His book One Vast Winter Count: The Native American West Before Lewis and Clark (Nebraska Press 2003) won a half-dozen major awards, and his 1994 work, The American Revolution in Indian Country (Cambridge University Press), was nominated for a Pulitzer Prize.

Calloway came to Dartmouth as a visiting professor in the Native American Studies Program in 1990, became a permanent member of the faculty in 1995, and chaired the program from 1997 to 2009. He served as president of the American Society for Ethnohistory from 2007 to 2008 and in 2011 received the American Indian History Lifetime Achievement award.

At the ceremony in Lucerne on Nov. 6, Calloway was recognized for his “groundbreaking contributions to a new interpretation of the history of North America from the viewpoint of the First Peoples.” The citation continues, “With his studies Colin G. Calloway unveiled how very limited our knowledge was before innovating scholars like him shone a light on that other side of the past.”

Following the ceremony, Calloway gave a brief lecture on his current research and answered questions from an enthusiastic audience.

Back in Hanover, Calloway hopes to continue to develop this international relationship. “The faculty told me that they are developing a new course on Native American history,” he says. “It would be my pleasure to provide any assistance they might want.”