Read the full story by Judith Hertog, published in the November/December 2014 issue of Dartmouth Alumni Magazine. In the dark Loew Auditorium, a sold-out crowd of more than 200 people have settled into their seats. Local stand-up comic Cindy Pierce appears on the wide screen, launching into her somewhat raunchy act: “Twice in my life I’ve gotten poison ivy in my crotch,” she announces. As she describes going grocery shopping while wearing adult diapers full of oatmeal porridge to soothe her itching, the laughter of moviegoers echoes that of Pierce fans on screen. 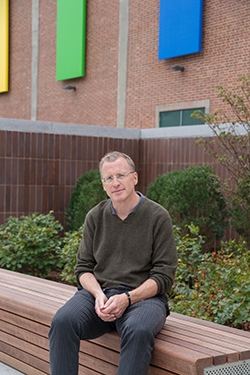 “When you have a camera, you have a perfect excuse to inquire into people’s lives and ask questions,” says Jeffrey Ruoff, an associate professor of film and media studies. (Photo by Eli Burakian ’00)

This is the world premiere of Good Vibes and Duct Tape, a 23-minute documentary about Pierce, an Upper Valley native, innkeeper, and sex educator who also performs a one-woman show in which she mines her own life for embarrassing stories that reduce mortifying taboos to lighthearted jokes. The screening of the film is the culminating experience of a documentary class taught by Jeffrey Ruoff in the Department of Film and Media Studies. For 10 weeks his eight students, most of whom hope to work as filmmakers after graduation, have collaborated closely to produce a professional-quality documentary about their irrepressible subject. Ruoff, a film historian and documentary filmmaker who has taught at Dartmouth since 2001 and who recently produced and directed an award-winning documentary about the Pilobolusdance company, says he likes to assign subjects that force students to venture into worlds outside the Dartmouth bubble. “Documentary is the perfect way to do that,” says Ruoff. “When you have a camera, you have a perfect excuse to inquire into people’s lives and ask questions.”