Ridwan Hassen ’15, of Marietta, Ga., has been named a 2015 Rhodes Scholar. He joins Miriam Kilimo ’14, of Nairobi, Kenya, whose scholarship was announced earlier this month. 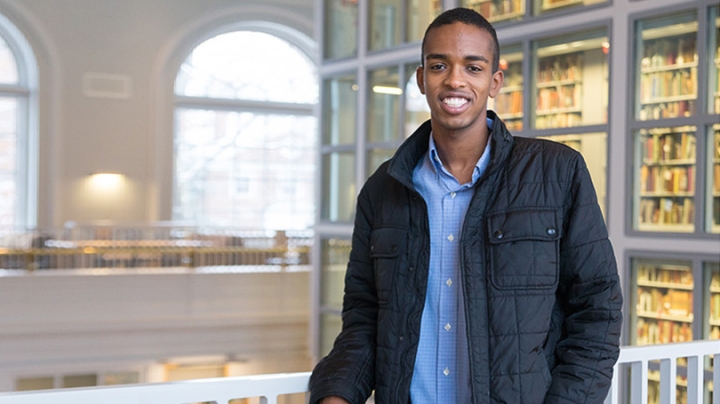 “On behalf of the entire Dartmouth community, I am so proud of Ridwan and Miriam, who are each impressive scholars in their own right,” says President Phil Hanlon ’77. “The fact that the College has again produced two Rhodes Scholars in a single year speaks to the depth and breadth of the intellectual opportunities available to students at Dartmouth.”

With this announcement, Dartmouth has produced a total of 77 Rhodes Scholars, including former U.S. Secretary of Labor Robert Reich ’68.

Out of 83 scholarships awarded by the Rhodes Trust each year to students from nearly 20 participating countries, 32 U.S. citizens annually receive the honor, which provides for two years of study in a degree program at the University of Oxford, in Oxford, England. Prominent American Rhodes recipients include former U.S. president Bill Clinton; physician and New Yorker writer Atul Gawande; and MSNBC host Rachel Maddow.

Hassen, who is majoring in computer science modified with neuroscience, will study public policy at Oxford, with the goal of bringing that knowledge back to his own community—and perhaps, one day, to a national political office.

“I want to continue to use science as a platform for education in my community, particularly to mentor underserved and minority students interested in STEM,” he says, of the fields of science, technology, engineering, and math, adding that he was stunned to hear his name called by the Rhodes panel.

Dartmouth Provost Carolyn Dever says Ridwan “demonstrates a curiosity and intellect that crosses disciplinary boundaries, and always seeks to use his learning to improve the world. It is gratifying to see the Rhodes Trust recognize Dartmouth’s best.”

Hassen, the son of Somali and Ethiopian refugees, is a first-generation college student. He attended Emory University for two years before transferring to Dartmouth as a junior. (His younger sister and brother are now also at the College, in the Class of 2017 and the Class of 2018, respectively.)

After his sophomore year at Emory, Hassen participated in Dartmouth’s Academic Summer Undergraduate Research Experience (ASURE), conducting research into genetic therapies for autism with Bryan Luikart, assistant professor of physiology and neurobiology at the Geisel School of Medicine. This past summer, he worked in a neurobiology lab as part of the University of California, San Francisco’s Summer Research Training Program.

“I feel very humbled and excited for this great opportunity,” says Hassen, expressing gratitude to all of his advisers at Dartmouth, Emory, and his high school. “My community at South Cobb High School, specifically, has been instrumental to my success.” He names Victor Burrell, a math teacher at South Cobb, as one of his earliest mentors.

“Ridwan has a lively intellect coupled with a remarkable level of commitment to making a difference in the world,” says Catherine Cramer, an associate professor in psychological and brain sciences who is one of Hassen’s advisers at Dartmouth. “He will be a real asset to the Rhodes program.”

At Dartmouth he is an undergraduate adviser and a student manager of the Collis Center, which he calls “the best job I’ve ever had.” In his spare time he runs long distance with the Dartmouth Endurance Racing Team. “My best ideas come while I’m running,” he says.

Hassen, who coached debate at Emory, looks forward to the opportunity to join the famous Oxford Union. “It’s the biggest debate society in world,” he says. “I used to watch Oxford Union debates on YouTube. I would love to be part of that.”

“Winning this scholarship is a remarkable achievement—the Rhodes is thought of as one of the most competitive scholarships in the world,” she says. “Scholarship Advising and the Committee on Graduate Fellowships help shepherd students through the process, and faculty members support students and help them define their career aspirations. It is an honor and a delight for all of us to have the opportunity to work with wonderful students like Ridwan.”