U.S. Sen. Kelly Ayotte (R-N.H.) met with President Phil Hanlon ’77, other Dartmouth officials, students, and community leaders to hear their thoughts on how to improve a bill to address the problem of sexual violence on college campuses. 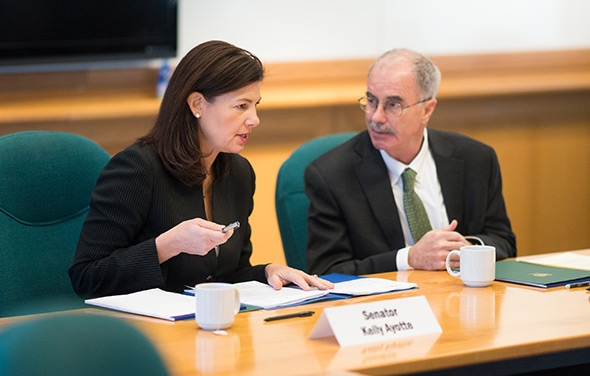 Ayotte is one of eight original co-sponsors—along with U.S. Sen. Kirsten Gillibrand ’88 (D-N.Y.) —of the Campus Accountability and Safety Act, which seeks to create consistency in the way college administrations and local law enforcement agencies pursue cases of campus sexual assault, ensure a process for victim advocacy, and establish a uniform campus climate survey for colleges and universities across the nation.

Ayotte came to Dartmouth on Nov. 21 to meet with Hanlon and others to hear their views on the pending legislation. The visit concluded with a roundtable discussion with students, College officials, and representatives from the Hanover Police Department, the Grafton County prosecutor’s office, and the Lebanon, N.H.-based WISE domestic and sexual violence crisis center. The roundtable was held at the Nelson A. Rockefeller Center for Public Policy and the Social Sciences.

“I know that Dartmouth has been really carefully looking at these issues,” Ayotte said at the discussion, which was co-hosted by President Hanlon. She described the session as an informal hearing “to get feedback about what’s happening here, what you think, and how we can build on this legislation.”

Hanlon called Ayotte a strong ally. “We appreciate your leadership and appreciate your collaboration in this as we all work together to try to take bold action to end sexual violence and sexual assault on our campuses.”

Murylo Batista ’15, a member of the Student and Presidential Committee on Sexual Assault (SPCSA), said the bill does a lot of the things he has long been pushing for as a peer advocate, particularly the mandatory campus climate survey and increased collaboration between campus and local law enforcement. “At the end of the day, this is a serious crime,” he said.

As a peer adviser, Batista said he knows that often victims are too traumatized to think about the legal process, and have too little information to navigate the many options available to them.

“What I’m interested in is, how do we get this information from the White House to the dorm room?” he said. “Often students don’t make their decisions around truth, but on perceptions of truth. So it doesn’t matter if you know all these resources are there, if we don’t know it.”

Sophia Pedlow ’15, chair of SPCSA, praised a provision of the bill that addressed the issue of amnesty for victims and witnesses of sexual assault from lesser crimes, such as underage drinking. Fear of prosecution can prevent a student from coming forward, she said, but added that the bill needs to be more specific.

“What specifically do you have amnesty from?” Pedlow said. “I know informal practices mean nothing to students. They are trying to figure out, is this really worth potentially ruining my college career? Should I get in trouble for this other thing that happened when I report this really catastrophic thing that happened?”

Peggy O’Neil, director of WISE, said she has worked with thousands of survivors in her career. “Despite the efforts of what I think are caring and well-intentioned and well-trained law enforcement, and prosecution, victims just don’t see justice in the way that victims of other crimes do,” she said. Any solution must put victims “at the forefront of all the decisions.”

The College is committed to supporting survivors, making sure they know their options, and collaborating with advocacy groups as well as law enforcement in a way that is transparent, said Heather Lindkvist, Title IX coordinator and Clery compliance officer for the College. Lindkvist and O’Neil are discussing possible ways to bring an independent advocate from WISE to campus, Lindkvist said.

Hanover Police Chief Charlie Dennis said the department takes very seriously the assertion that cases involving sexual violence do not often end in conviction or even prosecution. “The buck stops here. We are asking, how do we make a difference?”

He pointed to closer cooperation with Dartmouth’s Safety and Security, and making sure there is communication and transparency as a case moves forward. He said the department is investigating a program called You Have Options, “a victim-centered and offender-focused response to sexual violence,” that is advocated by David Lisak, a nationally known researcher on sexual assault. Lisak was a lead organizer of Dartmouth’s Summit on Sexual Assault held in Hanover in July.

Ayotte said that she and Hanlon have spoken about the bill’s provision establishing a standard national template for campus climate surveys.

“The advantage is we would be able to compare institutions,” Hanlon said. Dartmouth plans to administer a survey to students on sexual assault this spring, he said. The College will share details once they are confirmed, according to a statement from the office of the Dean of the College.

The Campus Accountability and Safety Act, S.2692, was introduced by U.S. Sen. Claire McCaskill (D-Mo.) in July, and will likely go to a hearing before the Senate Committee on Health, Education, Labor, and Pensions in the next congressional session. In the meantime, Ayotte said she will continue to speak with college communities and seek comment on the bill from all interested parties.

“I appreciate the specific feedback, which we’ll incorporate,” she said.

“It’s an issue we care passionately about here at Dartmouth, and we’re interested in collaborating with you in any way we can,” Hanlon said.