Students Launch Archive of Stories From the Vietnam Era

Editor’s note: Dartmouth is commemorating Veterans Day with a series of events, honoring the service of America’s veterans.

In 1969, while John Spritzler ’68 was joining the antiwar activists taking over Parkhurst Hall in protest of the ROTC presence on campus, his classmate John Everett Jr. ’68 was seeing combat in the Cam Rahn Bay, where he was serving as a junior officer aboard the gunship USS Gallup. 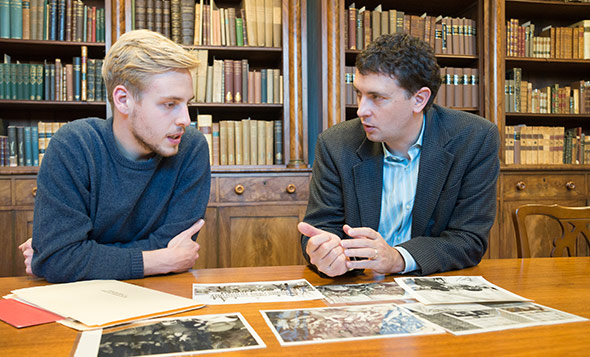 Dartmouth was as polarized during the Vietnam War years as the rest of the country, say history professors Edward Miller and Jennifer Miller (no relation). Now their students are collecting stories from all sides—including Everett’s and Spritzler’s—in the Dartmouth Vietnam Project, a new online oral history archive of the Dartmouth community’s experience of the era.

This past summer, six members of the Class of 2016—Hannah Chung, Sean Connolly, Paul F. Danyow, Timothy Harrison Jr., Anne Reed-Weston, and Elena Ridker—conducted the first six interviews, which are available on the site as audio files and transcripts. The students did the work though the Junior Research Scholars program and were funded by the Lucas Family Fund for Undergraduate Research.

“We’re defining the Dartmouth community broadly,” Ed Miller says. “We’re interested in anyone with a connection to Dartmouth who experienced the era.” He hopes that, as the archive grows, students will collect more than 100 interviews a year with alumni, faculty, staff, family, and Upper Valley residents. (Anyone interested in participating can fill out a volunteer form on the archive website.)

For students, the project is an opportunity to apply knowledge from the classroom. Over two terms, they will receive extensive training in historical research and techniques of oral history, interview multiple subjects, and design an in-depth project to answer specific historical questions. “Two terms allow us to do a lot more than we would be able to in one,” says Ed Miller. “The scope of their inquiry is broader.”

The co-curricular project grew out of his popular course on the Vietnam War, “History 26.” In 2012, a member of the Class of 1964 audited the course and recruited classmates who were veterans to speak to the students. “I’ve always brought in visitors to that class,” says Ed Miller, “but something about the fact that these were Dartmouth alumni made a difference in the kinds of conversations the students had with these veterans.”

Jennifer Miller, who teaches a course called “The Cold War and American Life,” got on board, as did staff at Rauner Special Collections Library, Baker-Berry Library, the Jones Media Center, and Educational Technologies. “This has been a major learning experience for Ed and me about the amazing resources available on this campus,” Jennifer Miller says.

Oral history itself is a collaborative process between interviewer and interviewee, notes Ed Miller. “The interviewer’s questions are just as important as the answers the interviewee provides.”

Jennifer Miller adds, “The student interviewers have to be constantly listening, thinking about their research and about how to draw out elements of the story their subject might not have told otherwise.”

That was the experience of Tim Harrison ’16, a history major from Staten Island, N.Y., who interviewed antiwar activist Paul Hodes ’72. “In the interview, he told stories that in some cases he had not thought about in several decades,” Harrison says. “I was struck by the applications of what I had learned in the classroom—he lived what I learned about in ‘Cold War and American Life.’ ”

These are exactly the kinds of connections the two professors want their students to make. “We want students to realize that they themselves are potential agents of history,” says Jennifer Miller. “Forging a connection with someone who has been through a major historical moment is a way to rethink your own position about what’s going on around you.”