Last year, President Phil Hanlon ’77 laid out his vision of creating a freestanding graduate school. Currently, Dartmouth offers 13 master’s degree programs and 17 doctorate programs, serving some 1,000 students. In October, Provost Carolyn Dever announced the formation of a task force to lead the development of a Dartmouth School of Graduate and Advanced Studies to bring the College’s graduate programs under one umbrella. Dever named F. Jon Kull ’88, the Rodgers Professor of Chemistry and dean of Graduate Studies, as chair of the committee. Kull recently spoke with Dartmouth Now about his work. 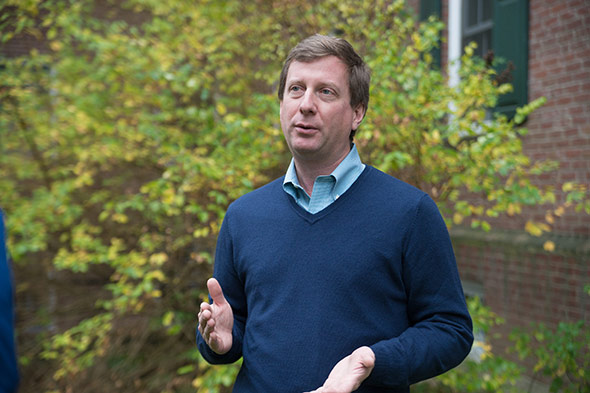 F. Jon Kull is the Rodgers Professor of Chemistry and dean of the Graduate Studies programs. (Photo by Eli Burakian ’00)

What is the value of an administratively independent graduate school at Dartmouth?Graduate education and basic research are key aspects of all great universities, and the reputation of an institution is substantially influenced by the quality of its research programs. In this regard, graduate students and postdocs already play a critical role at Dartmouth, but this involvement lacks a strong external profile, compromising our reputational rankings and making it more difficult to recruit and retain the best faculty in departments that have graduate programs.

By forming a graduate school, Dartmouth is sending a clear message that it supports its faculty and values the research that graduate students and postdoctoral scholars enable. Additionally, forming a school will make it simpler to advocate for and support graduate programs spanning Dartmouth’s departments, divisions, and professional schools. Furthermore, such a school could more easily support core programming—such as professional development, teaching assistant training, writing, and presentation skills—for graduate students and postdocs. It will also serve as a point to draw together graduate students, postdocs, and even visiting faculty.

How is this related to the Society of Fellows announced by President Hanlon?Of course the details of the school are still unclear, but it will be responsible for supporting Dartmouth’s postdoctoral scholars, and I expect this will include the Society of Fellows. Currently there are about 200 postdocs at Dartmouth, and while there is the Dartmouth College Postdoctoral Association (DCPDA), there is no administrative unit responsible for what I call the “care and feeding” of postdocs.

Both the Graduate Studies Office and the Dartmouth Center for the Advancement of Learning (DCAL) make workshops and professional development seminars available to postdocs. In addition, the people at DCAL consult with postdocs on teaching. If, however, a postdoc has problems, there is not a designated person for them to turn to. I expect someone in the new school will be responsible for acting as a liaison between postdocs/DCPDA and the administration.

I also hope the school will be able to ensure all postdocs passing though Dartmouth are exposed to our distinctive scholar-teacher model, and perhaps in some cases teach a course, so they can take the knowledge and skills they have learned, as well as a distinctively Dartmouth perspective with them when they leave Hanover.

Is this a departure from Dartmouth’s mission?Not at all. Dartmouth’s mission statement is educating the most promising students and preparing them for a lifetime of learning and of responsible leadership, through a faculty dedicated to teaching and the creation of knowledge.

We have about 1,000 PhD and master’s students at Dartmouth, and it is our responsibility to offer them the strongest education and training possible. The first principle of the task force is to make sure everything we propose will strengthen our existing programs. This effort will not only benefit the young scholars who pass through Dartmouth, it will also benefit the faculty whose research depends on graduate students and postdocs. This in turn will allow Dartmouth to continue to recruit and retain the strongest faculty, which also clearly benefits undergraduate students.

To look at this from another perspective—if Dartmouth were to shut down all of our graduate programs, I expect Dartmouth would lose virtually all its faculty in the sciences, as well as psychology and brain science, and cognitive neuroscience, as they would no longer be able to be effective at the creation of knowledge. Simply put, without graduate programs, Dartmouth would not have a faculty of the caliber we have now. Strengthening our graduate and postdoctoral programs will strengthen Dartmouth as a whole.

Will this program increase the number of graduate programs and/or students at Dartmouth?Not directly as a result of forming the school. The primary objective is to strengthen and support existing programs.

Having said that, as faculty lines are added, for example as a result of President Hanlon’s cluster-hiring initiative, if those faculty members are added in programs with graduate students and/or postdocs, it follows that the number of graduate student, postdocs, and support staff will also increase to some degree.

In terms of new programs, the school would play the same role that the current Graduate Office plays—to support new programs as they arise from the faculty. There are certainly no plans to develop new programs for any departments where they are not wanted or needed.

What was meant is that the school would be administratively independent. The Graduate Office currently has four full-time staff—three assistant deans and one administrative assistant; three part-time staff, and three part-time student employees. We are certainly not a large office considering we support, in one way or another, approximately 1,000 PhD and master’s students.

The Graduate Office recently moved from Wentworth Hall to a renovated suite at 37 Dewey Field Road. While that space is quite nice, it is somewhat out of the way, and I would expect the new school offices would eventually be located in a more central location, but not in a dedicated building.

Another pressing need is graduate student and postdoc social space. Currently there is no social space on campus dedicated to them. Frankly, I find this hard to believe, given that they represent such a large and important part of the Dartmouth academic community.

What do you see as the charge to the Graduate Task Force from President Hanlon and Provost Dever?Last year, President Hanlon spoke about forming an administratively independent graduate school as an aspect of “filling in the middle” at Dartmouth with exceptional scholars. To move toward this goal, the provost assembled the task force to investigate and address the many complicated issues that will arise during a transition from the current structure of an Office of Graduate Studies located in Arts and Sciences to an independent School of Graduate and Advanced Studies.

The expectation is that the task force will reach out to numerous constituencies to identify potential issues, and then to present options to the provost for consideration. The task force will be informed by best-practice data from peer institutions as to the structure and governance of other graduate schools, as well as how they manage and support postdoctoral scholars.

We plan to meet over the fall and winter terms and then provide a report to the provost outlining ideas and options for the new school. I expect the structure of the school will be thoroughly vetted by Dartmouth’s faculties, and of course ultimately will need to be approved by the Board of Trustees.