Theater Department’s ‘In the Next Room’ Continues This Weekend 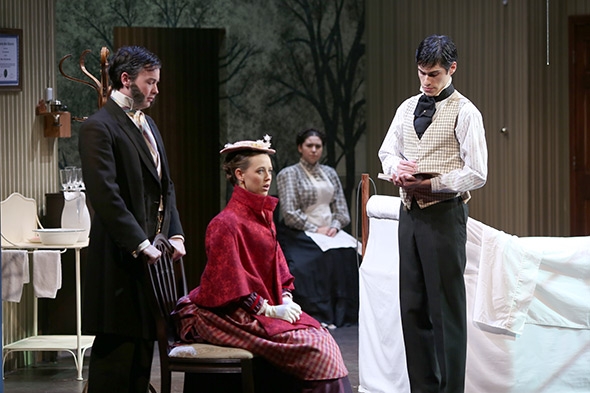 The Department of Theater’s production of “In the Next Room” continues Nov. 13-16 at the Hopkins Center. (Photo by Rob Strong ’04)

Set in the 19th century but with a contemporary feel, the play (a Tony Award nominee for Best Play in 2010) is both funny and touching. Playwright Sarah Ruhl, a MacArthur Fellowship winner and Pulitzer finalist whose previous plays include Eurydice and The Clean House—“illuminates with a light touch—a soft, flickering light rather than a moralizing glare—how much control men had over women’s lives, bodies, and thoughts, even their most intimate sensations,” writes The New York Times.

Taking place in a prosperous city not unlike Saratoga, N.Y., In the Next Room centers on Dr. Givings and his young wife. Givings specializes in hysteria, a female disorder believed to be caused by “congestion of the uterus,” and thought to be “cured” through therapeutic massage. The play finds Givings as he is trying out a new electric device that can more swiftly and reliably effect the cure.

Based on actual medical beliefs and practices of the time, In the Next Room explores the impact the doctor’s practice has on his patients—and on Mrs. Givings, who begins to yearn for whatever therapy it is that’s causing her husband’s patients to emerge from the sessions so refreshed and rosy-cheeked.

Associate Professor of Theater Jamie Horton, who is directing the production, says he was drawn to the play’s rich characters and relationships, and the nuanced manner in which it deals with the beliefs and taboos of an earlier time. “There’s a delicacy and understanding and humor that she [Ruhl] brings to all of it,” he says. At its core, the play is about characters “truly finding intimacy and love, and that is timeless—a theme that doesn’t go away.”