Dartmouth Now offers a weekly roundup of some of the noteworthy events on campus.

Nov. 14: Slumdog Millionaire co-director Loveleen Tandan speaks on “Song and Dance in Indian Cinema” at 3 p.m. on Friday, Nov. 14, in Rockefeller 3. The filmmaker’s visit is sponsored by the John Sloan Dickey Center for International Understanding; the Leslie Center for the Humanities; the Associate Dean for the Humanities; the Asian and Middle Eastern Studies Program; the Women’s and Gender Studies Program; and the Department of Film and Media Studies. 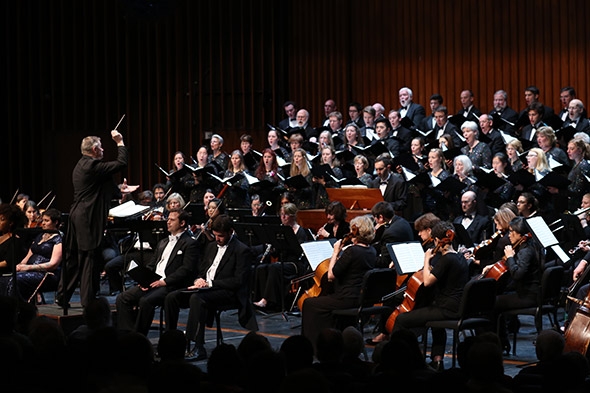 The Handel Society’s program for Tuesday, Nov. 18, includes the New Hampshire premiere of Annelies, the first choral setting of The Diary of Anne Frank. (Photo by Rob Strong ’04)

Nov. 14: Thayer School’s Visionaries in Technology Distinguished Speaker for 2014 is Jennifer Healey, research scientist for the Systems and Software Research Lab at Intel. She speaks on “Machine-to-Machine (M2M) Transportation Systems” at 3:30 p.m. on Friday, Nov. 14, in the Spanos Auditorium at Thayer’s Cummings Hall.

Nov. 14: Jacqueline Francis, associate professor in the graduate program in visual and critical studies at California College of the Arts, San Francisco, gives the annual Angela Rosenthal Distinguished Lecture at 4 p.m. on Friday, Nov. 14, in Carpenter 13. The lecture series is a tribute to Professor Rosenthal, who died in 2010. Francis’ talk is titled, “On Norman Lewis and Painting Abstractly in the 1950s and After in New York.”

Nov. 14: The Displaced Theater Company lands in the lobby of the Black Family Visual Arts Center for a site-specific performance of Art, a one-act comedy by Yasmina Reza that won the 1998 Tony Award for Best Play. The show starts at 9 p.m. on Friday, Nov. 14.

Nov. 15: Artists from the Pat Metheny Unity Group return to the stage of Spaulding Auditorium for a post-performance discussion, directly after their Nov. 15 show. The conversation, scheduled to start at 10 p.m., is free and open to the public; tickets to the 8 p.m. performance are available through the Hopkins Center box office.

Nov. 18: The Handel Society’s program for Tuesday, Nov. 18, includes the New Hampshire premiere of Annelies, the first choral setting of The Diary of Anne Frank. Tickets for the 7 p.m. performance in Spaulding Auditorium are available through the Hopkins Center box office.