Dartmouth Community Joins in the Revelry, Onstage and Off

The Christmas Revels, a beloved Upper Valley tradition for the whole family, celebrates its 40th anniversary this year with An English Celebration of the Winter Solstice. 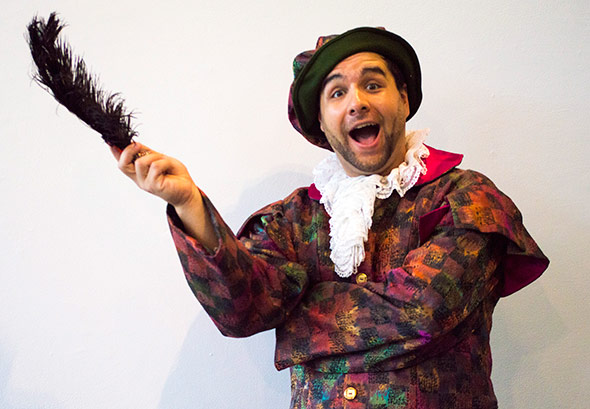 Josiah Proietti, a community director for the College’s Office of Residential Life, is one of the many Dartmouth community members involved in this year’s Revels. (Photo by Panos Charuhas)

This year’s show, which runs Thursday, Dec. 18, through Sunday, Dec. 21, in Spaulding Auditorium at the Hopkins Center for the Arts, takes the audience back to the 1920s. The ninth Duke of Rutland has inherited Haddon Hall, a historic English manor house that has sat empty for 200 years—or so he thinks. While selling the Hall would make him wealthy, a bevy of ancestors from the past 800 years who have a different idea come out of the woodwork to take matters into their own hands. The tale is told through drama and processionals, dance and music from the Middle Ages to the early 20th century.

About one-third of the approximately 70 cast members are members of the College community. Barbara DeFelice, director of digital resources and scholarship communication programs at the Dartmouth Library, is one of them. The Christmas Revels has long been a family affair for DeFelice, who dances in this year’s show, and her husband, Chris Levey, an associate professor of engineering at Thayer School of Engineering. In addition to singing bass, Levey performs in the group dance and directs and performs the special ritual dances, which trace their roots to pre-Christian England. Their son Nacio joins in as a member of the children’s chorus and children’s fiddle squad.

Among other Dartmouth employees is Josiah Proietti, a community director for the College’s Office of Residential Life, who is part of the tenor section and mummer’s play—another traditional part of the Revels show; he also plays a lead character, Motley. David McGaw, a research engineer in the Department of Physics and Astronomy, dances to a suite of Handel’s Water Music and the 16th-century folk tune Hollie Berrie. John Severinghaus, a Geisel School of Medicine lecturer in psychiatry, sings bass, including as part of a small group singing the 1982 John Tavener composition The Lamb.

Dartmouth employees and families are also part of the production team. Sara Campbell, assistant director of institutional events in the Office of Conferences and Events, is the production and stage manager, while her husband, Todd Campbell, a Hop production manager, designed the lighting.