Dartmouth scholars across the spectrum of government and diplomacy, history, and economics hail the Obama Administration’s move to restore full diplomatic relations with Cuba as a momentous step forward, but they warn that the president still has to navigate some strident opposition in Congress. 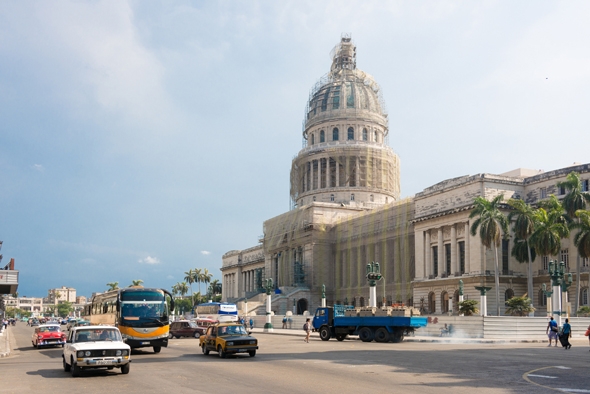 With the change in U.S.-Cuba relations, scenes like this Havana streetscape, dominated by the Capitol building, may become more familiar to American students and other travelers.
(Shutterstock photo)

Professor John Carey, chair of the department of government, says he “could not be more pleased” about the change in policy, but says it is important to understand that the policy often referred to as the Cuban embargo “is actually a series of policies that restrict travel, trade, investment, and communications.”

Beginning next fall, Dartmouth students will be able to enroll in the 15-week Dartmouth exchange in collaboration with the Consortium for Advanced Studies Abroad (CASA), the Casa de las Americas, and the University of Havana.

Carey, the John Wentworth Professor in the Social Sciences—whose work focuses on elections, constitutions, and Latin American politics—says unwinding a 50-year patchwork of policy will not be simple. “Some elements are the products of executive action, but others are products of legislation. The president can roll back the former, but the latter will be harder.”

Hours after the Cuban government released American contractor Alan Gross after five years in prison, and reportedly traded three Cuban spies for an unnamed U.S. intelligence agent, President Obama announced from the White House that the United States would open an embassy in Havana and loosen trade, banking, and travel restrictions imposed on the island nation.

In announcing he will overturn the policy imposed in 1961, Obama said, “We will end an outdated approach that has failed to advance our interests. Neither the American nor the Cuban people are well served by a rigid policy that is rooted in events that took place before most of us were born.”

The fact that he doesn’t face reelection may have made Obama’s decision easier, says Daniel Benjamin, the Norman E. McCulloch Jr. Director of the John Sloan Dickey Center for International Understanding.

“And it was made possible, in part, by changing attitudes in the Latino community and among Cuban Americans in Florida. There was a time when this was the third rail of American politics,” says Benjamin, who worked at White House when a plane flown by the Miami-based anti-Castro group Brothers to the Rescue was shot down by Cuba. The Cuban spies released in the swap this week were linked to that incident.

“I remember vividly how heated this whole issue was,” he says.

Still, while there may be an opening in the politics around the Cuban embargo, a number of lawmakers with ties to the Cuban-American community are preparing for a battle, Benjamin says, notably Sen. Marco Rubio (R-Fla.), who is reportedly exploring a run for president, and Sen. Robert Menendez (D-N.J.), the outgoing chair of the Senate Foreign Relations Committee.

Carey, who has studied Cuban politics and, in 2008, took a Little League-age baseball team from the Upper Valley to play in Cuba, says he is hopeful that Obama’s move will result in real change. “Although the most strident anti-Castro voices in the United States will criticize these changes, there is good reason to think the shift will hasten the opening of the Cuban regime rather than solidify it.”

It was a bipartisan delegation of lawmakers, Vermont’s Sen. Patrick Leahy (D-Vt.), Sen. Jeff Flake (R-Ariz.), and Rep. Chris Van Hollen (D-Md.), who flew to Havana to bring Gross to freedom. All three have worked for years to win Gross’s release.

William Craig, a visiting professor of English, is the author of Yankee Come Home: On the Road from San Juan Hill to Guantánamo, an account of his travels in Cuba looking for the historical and political links between the Spanish-American War of the 1890s and the U.S. war on terror following the Sept. 11, 2001, attacks. He says he has detected a shift in American views on the Cuban embargo.

“All Americans who pay attention to the news know we can’t find an example of economic sanctions deposing a dictator,” he says. “The embargo in no way resulted in deposition of the Castro regime, but was simply a way of punishing the people of Cuba for not obeying the United States of America.”

As the generation of Cold Warriors and of Cubans who fled Castro’s revolution passes attitudes are changing, Craig says. “So amongst Miami Cubans, and in Congress and on Wall Street, you see a lot more sentiment … from conservatives saying it’s about time we did normal business with Cuba. That’s the best way to engage.”

Economics Professor Douglas Irwin, the John Sloan Dickey Third Century Professor in the Social Sciences, whose work focuses on U.S. trade policy and globalization, writes in the Dec. 18 Wall Street Journal that the trade embargo has been a complete failure. He argues that commerce with Cuba is the best way to bring about change.

“Trade will unleash winds of change that will upset the status quo,” he writes. “As Ronald Reagan understood, there is nothing more unsettling to repressive regimes than allowing the exchange of goods and people, ideas and information, to flow freely between countries. Commerce is a conduit for this exchange and can upend the balance of power in closed societies.”

Carey agrees. “The decades-old policy of isolation has only insulated the Castro regime and provided it with an excuse for its abysmal performance on the economy and on civil liberties. More trade, more investment, more communications, more ideas flooding onto the island will, over the long term, bring change that benefits people on both sides of the straits,” he says.

After five decades, restoring ties to Cuba may be an idea that’s time has come, says Benjamin. ”Everyone is waiting for the end of the Castro regime, and an opening in Cuba, and finally I think the politics are catching up with attitudes here."