Dartmouth has become the third institution of higher education to participate in the Posse Veterans Program, a new partnership that will support U.S. military veterans in getting a college education.

The Posse Foundation announced Dec. 4 that Dartmouth has joined Vassar College and Wesleyan University in partnering with the Posse Veterans Program. Through partnerships with highly selective four-year institutions of higher education, The Posse Foundation will, at capacity, support the college aspirations of 600 deserving servicemen and servicewomen annually. 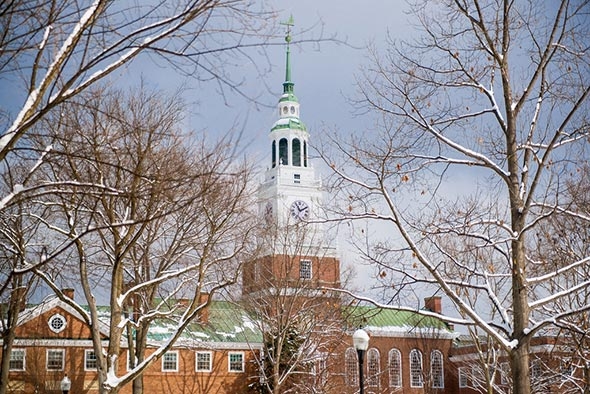 Dartmouth will enroll its first cohort of Posse veterans in the fall of 2016. (Photo by Eli Burakian ’00)

“Dartmouth has a longstanding commitment to provide educational opportunities to men and women who have served this nation in the armed forces,” says Dartmouth Provost Carolyn Dever. “The College is proud to partner with The Posse Foundation to bring a strong cohort of returning veterans to our campus and support them through their entire college experience.”

In response to a challenge from President Obama and First Lady Michelle Obama, The Posse Foundation today also announced plans to expand its Veterans Program to include a total of 12 top colleges and universities as partners over the next five years.

Posse’s initiative identifies and supports post-9/11 veterans of the U.S. Armed Forces who exemplify strong leadership and academic promise. Veterans selected for the program attend college in teams—or Posses—of 10 students, and receive four-year financial aid packages that cover the full cost of tuition, even when the GI Bill, Yellow Ribbon, and other government funding runs out. By creating cohorts of veterans, preparing them for the college experience, and supporting them through graduation, the program helps to ensure success in college and, ultimately, in the workforce.

“This partnership will strengthen Dartmouth’s support for student-veterans,” says Maria Laskaris ’84, Dartmouth’s dean of Admissions and Financial Aid. “The Posse Veterans Program will not only help these students build the kind of community of peers that is critical for a successful transition to college—it will provide a meaningful resource to the entire Dartmouth community.”

The Posse Veterans Program was established in 2013 in partnership with Vassar College in Poughkeepsie, N.Y. In 2014, Wesleyan University, in Middletown, Conn., matriculated a Veterans Posse as the program’s second institutional partner. Dartmouth will enroll its first cohort of Posse veterans in the fall of 2016.

Posse founder and President Deborah Bial says, “We owe our veterans so much more than just our gratitude for their service. We owe them tangible support, demonstrations of our commitment to invest in their success, to recognize their incredible value to our public and private institutions. By developing more partnerships with incredible schools like Vassar, Wesleyan, and Dartmouth, The Posse Foundation will be able to connect hundreds of distinguished servicemen and servicewomen to the first-rate educational opportunities they deserve.”

The Posse Foundation is one of the most comprehensive youth leadership development and college access programs in the country. Posse recruits outstanding public high school students in Atlanta, Boston, Chicago, Washington, D.C., Houston, Los Angeles, Miami, New Orleans, and New York, as well as post-9/11 U.S veterans from all over the country, and sends them in teams to some of the most selective colleges and universities in the country. This year, Posse received more than 15,000 nominations for 700 scholarship slots.

Posse began in 1989 because of a student who said, “I never would have dropped out of college if I had my posse with me.” “Posse” at the time was a term used in youth culture to refer to one’s group of friends or support system. This simple idea became the basis for a national program that today supports urban, college-bound public school students and veterans with exceptional promise and potential for leadership.

Since its inception, Posse has sent close to 5,500 students to college. These scholars have won $688 million in scholarships from Posse’s university and college partners. Most important, they are persisting and graduating at a rate of 90 percent—a rate that well exceeds the national average and equals or exceeds the average graduation rates at most selective colleges and universities in the United States.