Growing up in Cleveland, Ohio, Associate Professor of English Michael Chaney was a comic book fan-boy. “I come from a multiracial family, so for me the X-Men made sense: Everyone looks different, everyone is a mutant,” he says. “Comic books solidified my love of letters. My first publication in graduate school was a Jungian analysis of Aquaman.” 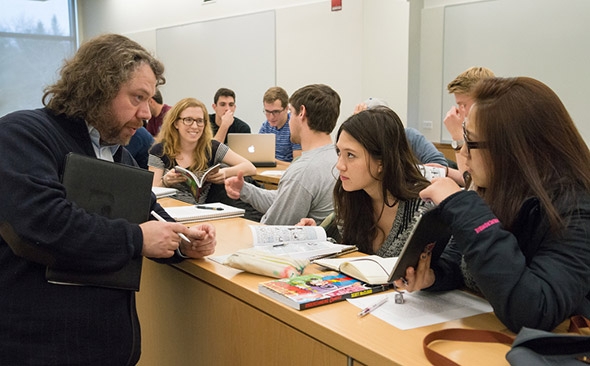 For the past decade Chaney, who specializes in 19th-century American and African American literature and culture in addition to being an accomplished artist, has taught “English 53: The Graphic Novel.” The course combines a rigorous analytical approach to reading visual texts—from Art Spiegelman’s Maus and Alison Bechdel’s Fun Home to the work of MFA students and faculty at the Center for Cartoon Studies in White River Junction, Vt.—with creative assignments in which undergraduates, many of whom have never drawn before, make their own comics.

“The results have been amazing,” he says. “I’ve been surprised that this course has produced so many professional visual utterances from my students.”

Indeed, several of his former students are publishing their graphic work. Much of what they are producing, he says, falls into what might be considered a new, hybrid genre: comics poetry.

Sarah Rutter ’13, an English major from North Andover, Mass., whose graphic poem “Cedar Shingles” appeared in the Nashville Review in April, says, “The imagery of poetic language can be richly enhanced when put into dialogue with visual imagery.” She made “Cedar Shingles” as her final class project, using plywood and laser cutters, which she had learned to use in an architecture class. “The process was rewarding and extremely fun.”

Julie Fiveash ’13, a studio art major from Yuma, Ariz., whose graphic poem “That House” appears in Drunken Boat, took Chaney’s class during her first-year spring, and returned as a teaching assistant her senior year. “The fact that Dartmouth was offering a class on comics as literature just blew me away,” she says.

Rutter, who took the course as a senior on the recommendation of a friend, says, “The class fulfilled my desire to study the interaction between verbal and visual communication—how we make meaning through verbal and visual symbol systems.”

Chaney’s teaching style is student centered; he uses small groups as “mini think tanks” to generate ideas that the entire class can expand on. “It’s cumulative and incredibly collaborative,” he says.

According to Chaney, every graphic novel and comic book is inherently pedagogical. “Every comic book must teach its viewers how to read it, because it’s a medium that’s so saturated with the subjectivity of the author that it requires a kind of decoding process,” he says. “It teaches us its own symbolic language.”

By term’s end, he says, “students will be making linkages that I would never expect in another class. The picture on the page puts students at a level of comfort with textual analysis that is difficult for them to assume with canonical print text.”

That’s because “it’s hard to feel distant from a text if part of that text is an image of a funny animal involved in funny shenanigans,” he says. “It wants you to know it. It wants you to make claims about it.”

In addition to analysis, students make two graphic assignments inspired by their readings, at the beginning and the end of the term. Many students are anxious about their ability to draw at first. “I tell them, ‘If you can draw a stick figure with googly eyes, you can make a comic.’”

And Chaney is quick to give extra encouragement to those students who go beyond googly eyes.

“Professor Chaney has been the ideal mentor,” says Mitchell Jacobs ’14, from Minnetonka, Minn., whose work will soon appear in Weave Magazine and Pinball. “He told us, ‘Don’t be afraid to impress me,’ which motivated me to take my work seriously. And he urged some of us to submit to literary journals. I wouldn’t have considered that a possibility otherwise, and my drawings would still be sitting in my closet somewhere, getting crumpled.”