Read the full story by Michael Blanding, published in the fall 2014 issue of Dartmouth Engineer magazine.

You put a motion sensor at the doorway and scatter several others around the hallways and stairwells. Then you sit back and watch as they light up in a pattern. It’s easy enough in this imaginary house to determine when an intruder enters and exactly where he or she goes inside the building. 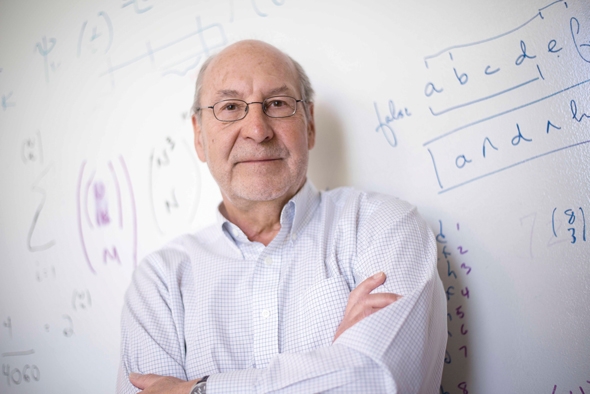 Now, however, imagine several people enter and exit the house at different times and take different routes through the halls and rooms. Based on the pattern of sensors, could you tell how many people arrived and where each one went? Now imagine hundreds of people enter and exit over the course of the day—and one of them is an intruder who has set out to rob the place. Can you tell which one he is?

These are the kinds of questions that preoccupy George Cybenko, the Dorothy and Walter Gramm Professor of Engineering at Thayer School of Engineering, and have informed decades of his research into signal processing. “If I see a sequence of events associated with different behaviors, can I associate those events with the right behaviors?” he says, drawing out the thought experiment. “Based on where the sensors are and how fast people typically walk, can I take all these reports and say with high probability that this is the track of one person?”

That may seem like a simple task, but the answer to the problem has implications in areas as disparate as cybersecurity, stock-market fraud, and counterterrorism. During the past 30 years, Cybenko has become one of the preeminent experts in finding patterns in the vast amounts of data that accumulate every time we enter a keystroke on our browser or make a transaction with a credit card. Most of the time such “behaviors,” as Cybenko calls them, are benign. But some behaviors, both online and in the physical world, are dangerous—a hacker trying to gain access to a company database, say, or a drug cartel trying to cross an international border.