The long-term financial health of the Geisel School of Medicine, the second year of a financial plan to reinvest resources in academic excellence, and the next phase of the Moving Dartmouth Forward process were among the topics Executive Vice President Rick Mills and Provost Carolyn Dever discussed at a town hall meeting on Dec. 4. 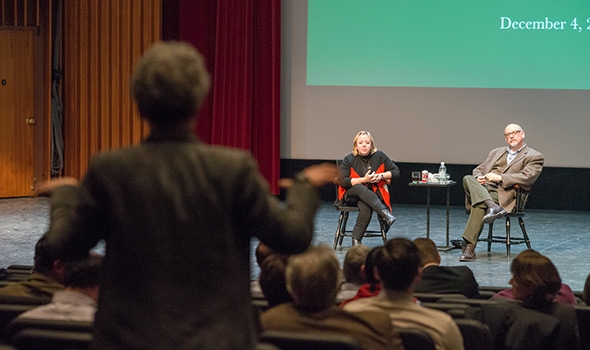 More than 200 people attended the noontime session in the Hopkins Center’s Spaulding Auditorium. Mills had invited members of the Dartmouth community to the forum, the second in an ongoing series, which this time featured Dever as a special guest. Mills says he hopes the meetings will help build trust among members of the College community.

“You don’t get trust because you say ‘trust me,’ ” Mills said. “You build trust and you earn trust over time.” His aim, he said, is to unite around the idea that everyone at the College is working to make Dartmouth better.

One approach to making Dartmouth better is to continue for a second year the reallocation of 1.5 percent of each division’s budget to stop doing activities that the division has determined are less valuable in order to free up funds for reinvestment. The money will be invested in new initiatives, with 1 percent of the funding remaining in each division for the division to make investment decisions. The remaining half percent will be pooled centrally and reallocated to fund proposals solicited from faculty and the divisions to further enhance Dartmouth’s academic enterprise.

The hope is that this intensive reappraisal of how the College spends its money will help define a shared vision for what’s best for Dartmouth, Dever said. Mills added that the funding will be dispersed to divisions based on the strength of specific project proposals.

“We will learn something through this exercise about what our stakeholders and our constituents mean by ‘academic excellence,’ ” Dever said. “That is going to be incredibly helpful as we work on communicating that we are all working on a shared mission and that we all need each other in order to get there.”

Further improvement will come from the Moving Dartmouth Forward process, which Dever said is nearing completion. She said President Phil Hanlon ’77 will present his plan to address extreme behavior on campus to the Board of Trustees on Jan. 28, and will announce the plan as part of a major address on his vision for Dartmouth’s future; the announcement is slated for delivery to the Dartmouth community on Jan. 29.

Dever and Mills also discussed recent budget cuts at Geisel. Both said medical school operations at their previous places of employment—Vanderbilt for Dever and Harvard Medical School for Mills—have faced similar financial challenges due to changes in the broader health care system in the United States. Both said the commitment to excellence at Geisel would not be diminished by the spending cuts.

In response to a question from the audience, Mills said the College has scaled back plans for construction on the north end of campus and doesn’t have current plans for a new building there. Instead, he said plans are being developed that would allow the existing frameworks of the Dana and Gilman buildings to be retained and “reskinned,” at half the price of earlier plans.

Dever told the audience that President Hanlon’s creation of a Society of Fellows has been very well received, with almost 1,750 applicants for five postdoctoral fellow positions. The society, which will include faculty fellows, postdoctoral fellows, and visiting fellows, is an interdisciplinary community that will support the integration of research and teaching excellence.