To be eligible for election to Dartmouth’s chapter as a junior member in course, an undergraduate must have completed eight terms within three years of matriculation and hold one of the top 20 cumulative grade point averages in their class. 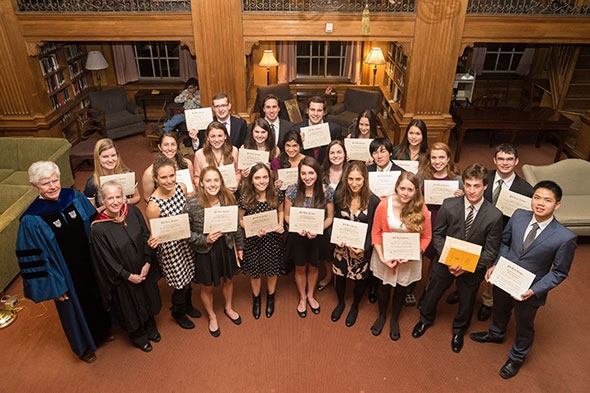 Chapter vice president Colin Calloway, the John Kimball Jr. 1943 Professor of History and professor of Native American studies, told the inductees, “This afternoon you men and women of Dartmouth are being admitted to membership in an honorary, scholastic society. The honor is one attained only by a combination of high intellect, an inquiring mind, and the capacity for sustained hard work, and it is a pleasure for me to be taking part in conferring that honor.”

The program, which was chaired by chapter president Jay Hull, a professor of psychological and brain sciences, included remarks by Kate Soule, secretary-treasurer of Dartmouth’s Alpha of New Hampshire chapter, president of the national Phi Beta Kappa Society, and director of Dartmouth’s Arts and Sciences Finances and Research Administration.

The chapter named John M. Carey, the John Wentworth Professor in the Social Sciences, as an honorary member, and Kenneth Lieberthal ’65, a senior fellow at the Brookings Institution, as an alumni member. They will be inducted into the chapter at the spring 2015 meeting. The chapter also gave the Phi Beta Kappa Sophomore Prize to 11 members of the Class of 2016, an honor that recognizes students with the highest grade point average at the conclusion of five terms.

Founded in 1776 at the College of William and Mary, Phi Beta Kappa has 280 chapters on college and university campuses and well over a half-million living members. Its purpose is to advocate for and recognize excellence in the study of the liberal arts and sciences. Dartmouth’s chapter was established in 1787 and is the fourth oldest in the nation.

The following students were inducted to Phi Beta Kappa, Alpha of New Hampshire, on Nov. 11: