Rianna Starheim ’14 is not content to learn about the world secondhand. Since matriculating at Dartmouth, she’s traveled to Morocco, Egypt, Jordan, Taiwan, and Brazil.

So when a course on women in Afghanistan piqued her interest about that country, she knew she had to go there. 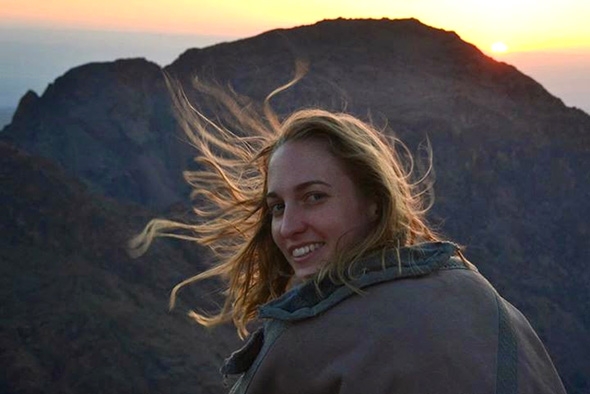 Rianna Starheim ’14 has traveled to many places, including Jordan, where this photo was taken. (Photo courtesy of Rianna Starheim)

“My parents almost hung up on me when I told them,” says Starheim, an Asian and Middle Eastern Studies (AMES) major who grew up on a farm in the tiny town of Jefferson, N.Y.

Undaunted, Starheim spent this past summer teaching English to high school students at Kabul’s School of Leadership Afghanistan (SOLA) and working as assistant to the country director of Hagar Afghanistan, an NGO that fights gender-based violence and human trafficking. “There’s always risk associated with travel, especially to a war zone,” she says. “For me, that risk was worth the amount I learned from the experience.”

Dartmouth could not support her trip, she says. “Dartmouth very reasonably doesn’t endorse undergraduate travel to any region on the State Department travel warning list, so I couldn’t receive funding.”

Researching organizations that might sponsor her, she learned about SOLA. The school, founded by Shabana Basij-Rasikh, an Afghan who returned to Kabul after studying at Middlebury College, paid Starheim’s travel expenses.

Everything about Afghanistan surprised her, she says—especially the roses blooming everywhere in Kabul. “A school guard picked me up at the airport. Driving with the windows down, smelling the roses from the median, when so much of what I had read about this country was gender repression and war, was amazing. My first 10 minutes in the country totally changed my view of it.” 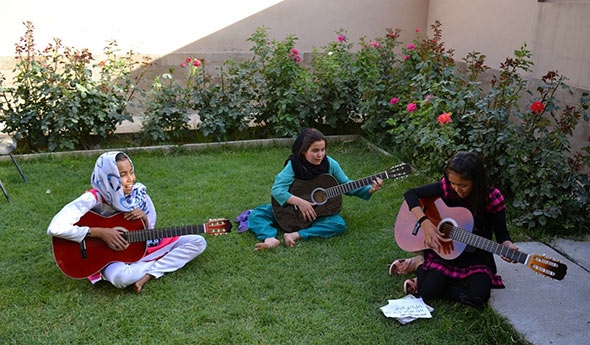 Her students were from varied socioeconomic backgrounds. “Some are from wealthy Kabul families, and some are orphans and have family affiliated with the Taliban,” she says. While Starheim was there, some of the girls saw a bombing less than a mile from the school. “That got the girls talking about the violence that they had borne witness to. The hardest part was seeing these children suffering and being powerless to make it better for them.”

But she stresses that her students “are like teenagers anywhere in the world. I was impressed with how much energy they had and how much energy I could take from them. I didn’t have a single bad day in Afghanistan.”

On her first evening in Kabul, Starheim happened to meet the country director for Hagar. “She told me about her job, and I was like, can I work for you?” Starheim, who as part of a gap year had worked for Polaris Project, a Washington, D.C.-based organization also focused on human trafficking issues, was able to put that experience to use for Hagar, interviewing victims of gender-based violence and documenting their stories.

Assisting Hagar’s country director, Starheim was also able to continue her academic work. “Part of my job was to synthesize all these agency reports about sexual and gender-based violence interventions, which is exactly what my thesis research would be anyway,” she says.

For Starheim, the most important part of her Afghan experience was “being able to put a human face” on the statistics she knew about Afghanistan from the news. “Those numbers don’t mean anything until you go and live there,” she says.

Back in Hanover, Starheim, a member of Paleopitus and an intern at the Dartmouth Alumni Magazine, is continuing her research—though again because of travel restrictions, her thesis will focus on Syrian refugees in Jordan, instead of Afghanistan. This winter, she’ll travel to the Zaatari refugee camp in Jordan to conduct field research.

When she graduates—a year later than her classmates, because of her gap year—she’s not sure what’s next. “I’m applying for jobs all over the place geographically and in terms of sector: journalism, government, NGOs, and for-profits.”

Meanwhile, she’s enjoying being a full-time student. “It’s so exciting that my full-time job is to learn. Now that I’ve been out of this rigorous academic environment for a year, I appreciate it more. It could not be better to be back.”

Whatever her future brings, she’s cautiously optimistic for the students at SOLA. “The future of Afghanistan is troubling, but these young girls are the best hope for the country. They are immensely patriotic, and their goal is to be educated. And that gives me hope.”

Starheim’s photographs from Afghanistan will be on display in the John Sloan Dickey Center for International Understanding’s Russo Gallery from December 15 through the middle of January.