The winter interim is an ideal time for students to reflect on their experiences and accomplishments at Dartmouth, and to assess the path ahead, says Sam Williamson, coordinator of co-curricular programs at the Nelson A. Rockefeller Center for Public Policy and the Social Sciences.

As a tool to foster this kind of careful reflection, the Rockefeller Center designed “Create Your Path,” a series of six short online video workshops culminating in a live capstone session at the Rockefeller Center, says Williamson, who has overseen the program since he came to Dartmouth in January 2014. 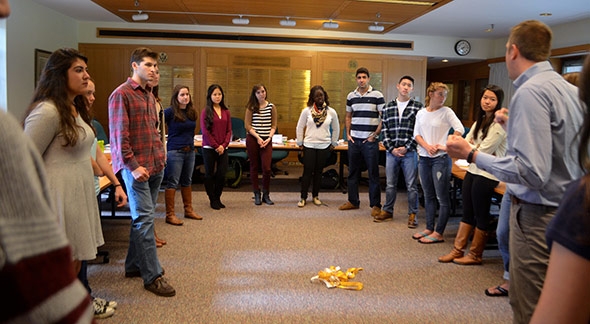 Students in a Create Your Path capstone session participate in a “fireside chat” about achieving their goals at Dartmouth. A yellow canvas strap was placed on the floor to represent a fire. (Photo courtesy of Sam Williamson)

Williamson says the idea behind the program was to help students clarify their goals. “We designed it because students would come to us all the time with questions we couldn’t necessarily answer for them—questions like, ‘I have so many different experiences and interests, how do I narrow it down to just one that I can chose as a major?’

“Or they’re thinking there are so many different opportunities after college but they’re not really sure which way they want to go,” Williamson says. “As much as we can offer advice, often what they really need is a tool for reflection so that they can feel confident in finding their own direction.”

The six online videos can be viewed from any computer or mobile device on the participant’s own schedule, and the program is accessible through free, online registration. In addition, a special viewing of the online workshops is also being offered on Dec. 10 for international students who are remaining on campus during the interim who register for the session.

Create Your Path is open to all class years and majors; no prior Rockefeller Center affiliation is required. The target audience is students facing transitional moments in their college careers, but it is open to anyone from the Dartmouth community, including alumni, who, says Williamson, could benefit from a chance to reassess their career and educational goals. Create Your Path is also included as a December Break milestone in the Center for Professional Development’s new Professional Development Accelerator.

Edgar Sandoval ’14 signed up for Create Your Path during his sophomore summer, and credits the program with helping him decide to pursue a career as a university professor. He says before he got involved with the program he was often making important decisions “on the spot,” without reflecting on how those choices fit into the bigger picture of his life.

“Being able to watch videos with some peers and talk about what other people were going through was very helpful in formulating how I saw myself, or wanted to see myself, in the future,” says Sandoval, who, through AmeriCorps, is now working as a “scholar coach” for first-generation college-bound high school students of color in Waukegan, Ill., and plans to pursue a PhD with the support of the Mellon Mays Undergraduate Fellowship.