Heading into the holiday break, the Dartmouth United Way campaign has reached 65 percent of the $320,000 fundraising target. 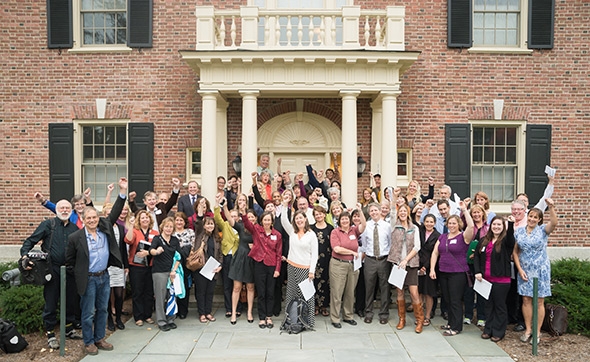 As the campaign got under way in September, Dartmouth United Way volunteer coordinators show their enthusiasm for the cause. (Photo by Eli Burakian ’00)

Campaign co-chairs Richard Mills and Gail Gentes note the generosity of the Dartmouth faculty, staff, and students and the many ways they support the Upper Valley.

“The people of Dartmouth are incredibly generous with their time and money, whether it is volunteering at a food pantry, organizing a coat drive, or giving money to charity and service organizations, and we just want to say ‘thank you,’ ” says Mills.

As the holidays approach and many consider year-end gifts, Mills and Gentes hope that people will consider the Dartmouth United Way campaign.

“It is a simple way to give, and we know that the money goes to critical groups in our community,” Mills says.

“We all understand that there is great need in the Upper Valley,” says Gentes. “And if you choose to give through the Dartmouth campaign, you can rest assured that the United Way is working very hard to ensure that your contributions go toward meeting those needs.”

Contributions of any size to the United Way go a very long way, Gentes says. Even a one-time, $5 donation can mean a meal for a family, or transportation and assistance for an elder, she says.

The United Way “thermometer” reflects just under $210,000 raised so far, with $110,000 to go to reach the College’s campaign goal. Five lucky contributors will be drawn for the final regular raffle on Dec. 19. They will take their pick from the remaining prizes, including a lift ticket to the Dartmouth Skiway, day passes to Whaleback, and meal tickets for 53 Commons.

Four campaign contributors will be selected on Jan. 9 in a grand prize drawing, with prizes including a $100 gift certificate to the Pine Restaurant, three nights of lodging in a cabin at the Dartmouth College Grant, a season pass to Whaleback, or one night’s stay for two at the Six South Street Hotel, with valet parking and breakfast. All donors are eligible, even the winners of previous raffles.